‘No one really knows what the consequences of Brexit will mean’

Inside Track: restaurateur Sham Hanifa, owner of the Cottage in Co Leitrim 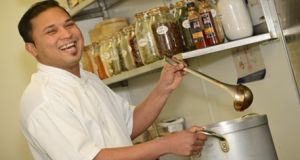 Since coming to Ireland from Malaysia at the age of 20, Sham Hanifa has won multiple awards for his restaurant the Cottage in Jamestown, Co Leitrim. With two other successful businesses in Carrick-on-Shannon, the Buffalo Boy Steakhouse and Synergy Cafe, Hanifa has been a culinary success story that emerged from the last recession.

What sets your business apart from the competition?
My multicultural background [Malaysian, Thai, Indian and Chinese] means that, as well as a focus on local Irish ingredients, I also have Asian influences on the menu that are very popular. My father was a butcher, therefore I have a strong knowledge of all areas of food from farm to fork.

What was the best piece of business advice you received?
Just go for it. There is never right or wrong time to start up a business. I’ve found this to be true. I opened my restaurant during some of the worst days of the recession. At the same time, we were extending the family home and my wife was about to have our second child. Things should work out if you put passion and love into whatever you do.

What’s the biggest mistake you’ve made in business?
There is excellent support available from local enterprise boards in rural Ireland regarding training and courses. My regret is that I only did the courses after I was open for one year. In Leitrim we are extremely lucky to have the support of Joe Lowe and his team at Leitrim Enterprise Board. They help all businesses, whether they are beginners or more established, to expand and develop their ideas. Leitrim Tourism helped to highlight Leitrim as a tourist destination.

And your major success to date?
Employing 32 people and still having a wife! My businesses are thriving, so I’m lucky. Another aspect of my success that makes me happy is the awards that I’ve won that are based on the public vote. The Cottage has been voted best restaurant in Leitrim 2012-2017 and 2019 in the Sunday Times 100 Best Restaurants in Ireland and Buffalo Boy Steakhouse and whisky bar was voted best gastropub in Connacht 2019.

Who do you most admire in business and why?
Local man Pat King is someone I look up to in business. He is managing director at King & Moffatt Building Services, a company that has recently expanded into the UK. Pat was very helpful when I first started off in my own businesses. He employs a lot of people locally and what I most admire about him is how much he gives back to the local community in support and sponsorship. I think it’s important for businesses to give back to the people who support them locally. My coffee shop is called Synergy, which means a mutually beneficial relationship because I believe in this.

Based on your experience in the downturn, are the banks in Ireland open for business to SMEs?
During the downturn they were supportive and helpful but when recovery began they were more cautious. More SMEs should be up and running in rural Ireland but most growth seems to be in urban areas.

People will travel and will support a good business. My restaurant is in a tiny village without even a shop, but I get people visiting from all over the country, as well as loyal locals. My rural location has never been an issue.

What has been the biggest challenge you have had to face?
Eighteen months after I opened the Cottage restaurant, the premises flooded as a result of the heavy rains of 2010. This was followed by two winters of extreme weather. It was a real challenge, especially as it happened around Christmas, the busiest time of the year.

How do you see the short -term future for your business?
Business is going very well at the moment, but there has been a very definite decline in visitors from the UK. As Leitrim is a Border county, the future challenge of Brexit is something we need to be prepared for. The most alarming thing is that no one really knows just what the consequences of a fully implemented Brexit will mean.

What’s your business worth and would you sell it?
I don’t think of my business in that way just yet – maybe in a decade or two. Right now I’m invested in making these businesses the best they can be before I would consider selling on.