Gareth Bale and the art of staying put

Your boss wants you gone, but you don’t want to go. So what’s to be done? 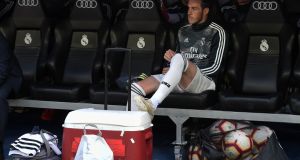 Theresa May has announced her departure but Gareth Bale is refusing to go. The Welshman may have scored 102 goals for Real Madrid, but Zinedine Zidane, his manager, has left him on the bench or out of the squad recently and has made it clear he has no further use for him.

His critics say Bale has lost some pace, but he would still be valuable to another team, probably in England. But none has emerged that is prepared to pay Real Madrid’s likely fee or match his €18 million annual salary. Bale has reportedly said that if the club wants him to go, it can pay him for the three years left on his contract. Alternatively, he is happy to stay and spend his time playing golf.

The sums may be smaller, but stand-offs like Bale’s happen in ordinary workplaces too. A colleague is given your responsibilities, your department is reorganised, leaving you out, or, as with Zidane, your boss just doesn’t rate you.

Organisations have many ways of telling you that you are no longer needed. Japanese companies have traditionally given unwanted employees a desk by the window with nothing to do.

Common sense tells you to quit when this happens, but, like Bale, you may have financial reasons not to. You may be waiting for share options to vest, for pensionable years to rack up or you may be angling for a pay-off. You will almost always receive more money if your employer tells you to go than if you decide to leave yourself. Or you may find it hard to land another job and still need the salary from your current employer. You may have family responsibilities that come before your own happiness at work.

What to do? Hanging around unwanted is mentally debilitating. You could leave and launch a legal claim for constructive dismissal. But the UK Citizens Advice charity warns: “It’s difficult to prove constructive dismissal - not many claims win.” You also need to look at how much compensation you will get if you do.

It is always worth getting legal or trade union advice but, if you have to stay, it is best to pursue your options internally. One route is the company’s grievance procedure, although you need to calculate how likely those running it are to contradict your boss and restore what you have lost.

There is also the danger that, sidelined, you will fail to develop the skills to keep up with your colleagues or the organisation’s changes.

Best of all is to put on a cheerful face and find something useful to do in your current company. Few organisations are static. New business opportunities open up, new customers appear. If the company is big enough, you can edge into another part of it. You can come up with a plan to make the organisation money or attach yourself to a new internal venture. That way, you ensure you stay abreast of the way the organisation is developing.

You may be seen as damaged goods and people may be wary of associating with you. But unless your diminished status is the result of a great scandal, most people are unlikely to be bothered. They may not know about your problem - or the memory of it may have faded. Most people overestimate how much others think or talk about them. You are not playing for Real Madrid.

If you perform in your new role, your previous diminution will probably be forgotten, unless the manager who did the diminishing is particularly vindictive. Many bosses who are vindictive lose interest anyway; there are other targets they can move on to. And remember that bosses move on too. You may outlast them.

But try not to fall into the same trap a second time. Think about how you can avoid becoming overdependent, financially or emotionally, on the organisation again. Spread your financial risk, watch out for other opportunities and keep in touch with colleagues who have gone elsewhere.

If the opportunity comes, take it. If the salary is lower, consider whether that is manageable and worth the price for a chance at greater job fulfilment. Perhaps Bale will eventually do the same. – Copyright The Financial Times Limited 2019