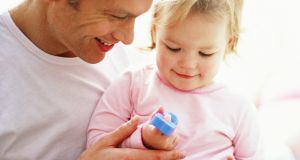 Last year a reader wrote to say that a sentence I had written was a total load of tosh.

In an article about five-hour work days, I had said I thought a lot of men would see more of their families if they could. The reader said: “It’s quaint how some women just don’t have a handle at all on the way most men are wired.”

My god, I thought: that could be true. Where I grew up a nappy changed by a man was, as Samuel Johnson might have said, not done well but you were surprised to find it done at all. Perhaps today’s fathers would quietly prefer things had stayed that way.

Yet over the past six months I kept coming across men who were not just unafraid of nappies but actively fretting about how to nab more paternity leave.

Some were so irked at how paltry their leave was compared with female colleagues that they had gone to court claiming discrimination.

I wrote about them in a column last month, braced for another whack about my quaint misunderstanding of men. Instead I was taken aback by the number of male readers who said they wanted to see more written on the topic, especially the hidden barriers keeping men in the office when they wanted to be at home.

Here is how one new father summed up the problem. He and his wife are both in their mid-30s and work at two of the world’s largest financial companies, she at an investment bank, he at an asset manager.

Both their firms offer relatively generous parental leave. His company has repeatedly said it backs rules the UK brought in four years ago that let parents share up to 50 weeks of leave, most of it paid.

The couple were keen to split their leave but ultimately decided she should take almost all of it. Why?

“The biggest reason is that we are both at a senior level, looking for our employers to consider us as future senior leadership material,” the father told me. “If I as a man had decided to take a large chunk of time off my commitment would have been questioned – not openly, but it would have been a black mark. I’ve seen that happen.”

His wife, conversely, was not only expected to take time off but could have raised “a serious stink” if she had been overlooked for promotion when she came back to work.

“I wouldn’t have been able to make that kind of noise,” he said, adding it was ironic that company efforts to help mothers return to work can end up making it harder for women to get help from their husbands.

“For my wife, leave is seen as a right, but for me it’s seen as a choice.”

This is just one story, but it chimes with research published last week showing men in their 20s and 30s are struggling to juggle work with fatherhood.

Nearly 90 per cent of the 2,000-plus men surveyed for the study from Deloitte and the Daddilife parenting website said they were involved in day-to-day parenting, most of them “fully”.

Almost half (45 per cent) said they suffered tensions at work as they tried to balance work with family life, and a similar share said better paternity leave was “vital”.

But what if laws and HR policies are not enough to overcome the cultural obstacles that block fathers from taking more leave?

One solution may come from people like Louisa Caswell. She is a partner at the Addleshaw Goddard law firm in London, and says there is an obvious way to overcome the stigma that men feel about taking leave. “You have to encourage your male stars to take it.”

She says once people see ambitious, successful men can take leave without harming their careers it changes the situation completely.

This requires management effort. When Ms Caswell finds out a man in her team is about to become a father, she takes him aside and suggests he should think about taking leave. Fathers are also encouraged to bring their new babies into the office and go to lunches for new parents held by the firm.

I like to think that one day none of this encouragement will be needed because not a head will turn when a father heads off for a few months of parental leave.

I also think that day is quite a bit closer than a lot of people might think.