‘We’ll get our share’ of post-Brexit FDI, says Noonan 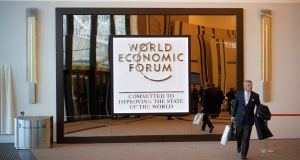 Amsterdam is emerging as the main rival to Dublin in attracting post-Brexit investment from London-based companies, Minister for Finance Michael Noonan said yesterday.

Speaking on the fringes of the World Economic Forum in Davos, Mr Noonan confirmed that more than 100 London-based financial services companies have expressed an interest in moving to Ireland.

“A lot of City of London companies have been making inquires about Ireland and are involved in effectively contingency planning in the event that the Brexit arrangements don’t work to their satisfaction. The Central Bank has hired extra regulatory staff and they have had in excess of 100 separate enquiries from firms based in the City of London.”

Mr Noonan, who along with Taoiseach Enda Kenny was in Davos to attempt to secure inward investment, said that the pipeline for all foreign direct investment into Ireland was “very very strong”, including in the financial services industry.

While Ireland was not “predatory” in its approach to attracting businesses, “we’re facilitating all companies that ask us questions,” he said. “We’ll get our share. There’s no doubt at all that there are many serious financial services companies that are committed to coming to Dublin.”

Mr Noonan and Mr Kenny gave a number of interviews to international media outlets on Thursday before attending an IDA dinner for approximately 50 guests at the Hotel Grischa in Davos.

In an interview with CNBC, Mr Kenny ruled out an election in 2017 in Ireland.

Asked if Irish people would go to the polls this year he replied: “not at all.”

“The people voted in an election, and they gave their answer. The politicians responded to that, and we put a Government together which is a minority partnership Government,” he said. “We want to continue to manage our finances, prudently in the people’s interest, and continue to grow employment, invest in infrastructure, provide good services for our people.”

Speaking to reporters on the sidelines of the summit Mr Kenny also suggested that some form of agreement will be reached on the customs union in relation to Northern Ireland.

“We have agreed certain measures with the British government, with respect of the retention of the common travel area, in respect of not having a return to the hard Borders of the past, and we want to continue to have the close trading relationships that we have with the UK.”

“Obviously, Britain is going to leave the single market . . . the question of the customs union is a different question, and that’s where there will be quite intensive negotiations. We don’t know the nature of that yet but, for me, we continue our plan at home. We continue with extensive diplomatic engagement.”

Mr Noonan also said a return to a hard Border in Northern Ireland was unlikely.

“If you look at [British prime minister Theresa] May’s speech, she committed to the free travel area [between Ireland and the UK]. She wasn’t as strong on what she would like from the customs union; she said it might be associate membership,” Mr Noonan said. “In other words, she opened up a negotiating space around the customs union and it is where that lands that will decide whether goods have to be checked on the Border. But a lot of this can be done electronically now and it wouldn’t necessarily mean a hard Border.”

The Taoiseach said he was confident that Ireland’s future as an investment was secure despite Brexit.

“I’m very confident and very optimistic that Ireland continues to be a very attractive location, both for investment from abroad, and for the possibilities for expansion of indigenous Irish industries. Yes, of course, in terms of currency fluctuations there are challenges . . . that’s an undoubted fact, but we’re continuing to be competitive, looking at new markets, at new opportunities. I’m very optimistic about the future.”