With billions at stake, algorithms and apps have been developed to respond to Donald Trump’s Twitter trigger finger 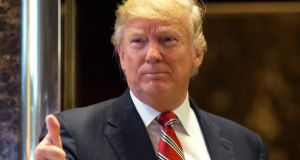 Most people are still struggling with Donald Trump’s flair for the unpredictable and his Twitter trigger finger. In business – where the unexpected costs money – life under the free-wheeling President Trump may be dicey.

When the US president-elect tweeted last month to complain about the “tremendous cost and cost overruns” of Lockheed Martin’s F-35 fighter jet, the company’s shares fell about 2 per cent, shaving about $1.2 billion (€1.1 billion) off the company’s market value. Ten days earlier, he had knocked $4 billion off the company’s value with another tweet bemoaning the cost of the fighter.

For the company, it was costly, being chided in public by Trump. For the incoming president, it proved the power of his new bully pulpit, all tweeted from the comfort of Trump Tower. Lockheed has said that it is trying to meet Trump’s demands for a reduction in costs.

Other companies have felt Trump’s social media wrath as the negotiator-in-chief looks to publicly shame corporate giants into rolling in line with his “America First” economic policy.

Boeing’s shares fell 1 per cent when Trump threatened (via Twitter) to cancel the order for a new Air Force One because the costs, at more than $4 billion were “out of control.” He threatened tariffs – “a big border tax” – on imported cars if Toyota, Ford and General Motors proceeded with plans to build new factories in Mexico. When companies cave and announce investments at home, he tweets to take credit, even if some of the plans have been in the works for a number of years.

The corporate world has adapted quickly to the vagaries of Trump’s America. Sophisticated traders have created algorithms that allow automated programmes to play affected stocks as soon as Trump’s tweets. The app Trigger Finance notifies users if he tweets about a company in which they own stock. Tech companies in California have changed staff rosters so an employee is awake at 3am on the west coast when an energised Trump, waking up on the east coast, is at his most active on Twitter. Today’s inauguration might give his tweet-watchers a little time off.

Trump’s transition to power has been a rollercoaster period for the business world. Market investors have basked in a post-election glow that often follows the election of new presidents. The benchmark S&P 500 has posted its biggest election-to-inauguration gain since Bill Clinton’s re-election in 1996. The index has risen 6 per cent since election day on November 8th, which, according to business news website Market Watch, is the fifth biggest election rally since Herbert Hoover’s victory in 1928.

Company bosses and their shareholders are excited by Trump’s promises to reduce taxes and overhaul the American tax code, to row back burdensome regulations and to inject stimulus into the economy with a vast infrastructure programme. Financial stocks have risen by 18 per cent in anticipation of lower taxes and deregulation, targeting in particular the Dodd-Frank rules on Wall Street, under the Trump administration.

American businesses are equally worried about his hard-nosed protectionism and threats to slap 35 per cent tariffs on the imports of companies that move their production abroad. 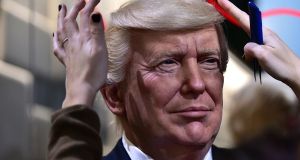 Your guide to Inauguration Day

At the bottom of the corporate ladder, those blue-collar workers who sealed Trump’s election victory in November seem to be thrilled at his enthusiasm to bully companies into protecting their jobs.

While polls show that Trump will be the most unpopular president in at least four decades when he takes office today, he still scores best on expectations about the economy. Six in 10 Americans polled by ABC News this week said that they expected him to do an excellent or good job on the economy and jobs.

In the heart of Trump country – the industrial midwest – businesses are waiting to see whether the incoming president comes good on the promises that drove so many to vote for him in those parts.

“There is obviously a lot of unpredictability and a lot of unknown about the guy,” said Jim Galvin, a Cork native who co-owns Chicago-based biofuels business Lakeview Energy. The firm turns over $350 million a year and employs more than 300 people in Ohio, Iowa and Missouri.

“Fundamentally, he is a businessman and if he sticks to that, we would be hopeful that he would be pro-business and pro the industry we are involved in. On the campaign trail, he showed a commitment to renewable fuels, but is he going to follow through?”

Galvin exports biofuels to Brazil, China and Peru and, like other businesses in the midwest, particularly those in agriculture that rely heavily on exports, he is concerned about Trump’s tough-talk on China.

“People are a little bit concerned if there is going to be a trade war here,” he said.

Trump’s pick to be commerce secretary, billionaire investor Wilbur Ross, stuck with his new boss’s plans to overhaul the North America Free Trade Agreement – a regular Trump target on the campaign trail – through renegotiations with Canada and Mexico, but seemed keen to reassure business-friendly lawmakers that Trump’s threats of 35 per cent tariffs on Chinese products were just opening gambits of a dealmaker.

“The president-elect has done a wonderful job preconditioning some of the other countries with whom we will be negotiating the change that is coming,” he told a US Senate’s commerce, science and transportation committee at his confirmation hearing on Wednesday.

Ross – best known in Ireland for his lucrative post-crash punt on Bank of Ireland, and in the US as the “King of Bankruptcy” for turning around distressed businesses – pointed to the spoils of a lower corporate tax rate as the best means to make the American business environment competitive.

Trump wants a 15 per cent rate, which would bring it close to and competitive with the Irish rate of 12.5 per cent, while Paul Ryan, the Republican speaker of the House of Representatives, believes 20 per cent is more realistic. It remains to be seen whether Trump’s tax reform will lead to a raid of Irish-based US multinational balance sheets rather than Irish workforces. American firms have tended to chose Ireland not for low-cost operations to sell product back into the US, but to serve customers in Europe or further afield.

David O’Sullivan, executive director of the Ireland-US Council business organisation, said that Ireland has always avoided attracting “runaway-plant activity” – investing overseas as part of a strategy to evade high taxes or operating costs in the US, the kind of strategy that Trump targets almost daily on Twitter.

“Ireland has never been in that game,” said the New York-based O’Sullivan, who moved to the US four decades ago to join IDA Ireland’s marketing operations in the US.

An unintended benefit to Ireland from a reduction in the American corporate tax rate, he says, will be the removal of the stigma of being “wrongly tagged as a tax haven” after years of negative press in the US.

Among Trump’s tax reform plans is a one-off reduced repatriation levy to draw back an estimated $3 trillion of American corporate money stashed overseas, including in Ireland.

Overhauling the tax code may not be as straightforward as Trump has promised. He has clashed with Republicans over their “border adjustment” tax, which would tax imports and exempt exports. “I don’t love it,” Trump told the Wall Street Journal of the proposal that is central to raising more than $1 trillion that would finance the overall reforms proposed by congressional Republicans.

Without consensus even among his own party, tax reform could be a more protracted goal. Expect more angry tweets from the badgering Trump, and not just directed at US companies.