The five biggest Irish threats from a hard Brexit 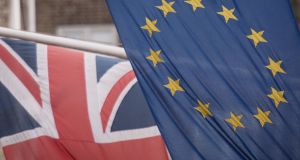 In general, the harder the Brexit, the worse it will be for the Republic, the Department of Finance study found. Photograph: PA Wire

When the ESRI and the Department of Finance published a study late last year on the impact of Brexit, it got some attention, but the fuss was limited. Now, after British prime minister Theresa May’s speech this week, everybody is sitting up and taking notice, particularly as senior Department of Finance officials outline the findings at the Oireachtas Finance Committee. With a so-called hard Brexit looking inevitable, here are the ways the report found our economy would be affected.

1. Brexit will be bad for us, however it happens. The report examined various ways Brexit could occur. All involved a hit to Irish growth and jobs, even allowing for the fact that there would be some pluses, too, in terms of inward investment here. In general, the harder the Brexit, the worse it will be for us, as the greater the break between Britain and Europe, the bigger the threat to trade between Britain and Ireland.

Overall the “hit” to growth could, at worst, be close to 4 per cent after 10 years, and most of this would be in the first five years after Brexit. So not far off one percentage point could be knocked off growth in the initial few years after Brexit happens, assumed to be spring 2019.

And total employment could be 40,000 below what it would otherwise be after a decade, again with the biggest impact in the earlier years. The analysis does not take into account the impact of measures the Government could take to mitigate the Brexit impact.

2. The biggest threat comes from disruption in trade to Britain. If Britain leaves the European Union with no agreement on future free trade between the two, then the likelihood is that special import taxes, or tariffs, would apply on trade between Britain and EU countries. So Irish exporters to the UK would face tariffs, at levels set down by the World Trade Organisation (WTO), the body which governs world trade. Tariffs would also apply on British imports here, which would, in theory, push prices up in the shops.

The fact that Britain is expected to grow more slowly – and that this will affect EU growth – will also affect our exporters. That said, the British economy has so far held up better than expected, but remember Brexit hasn’t happened yet.

3. A “softer” Brexit, with fewer barriers to trade in future, would have a significantly smaller hit on our economy. So if Britain and the EU can agree future trading arrangements with no tariffs, or tariffs smaller than those set down by the WTO, the hit will be less. The initial mood music before the talks suggests this will not be easy.

4. Some sectors are particularly exposed. Tariff levels have emerged over many years of international trade. For historical reasons – and because countries have wanted to protect their own farming sectors – tariffs tend to be higher on heavier products, particularly foodstuffs. So tariffs on some kind of meat exports, for example,could be up to 50 per cent using WTO levels, which would effectively price many Irish producers out of the UK market, and out of business.

5. While some sectors would be hardest hit, the economic shock would spread out through the economy. Lower exports would lead to lower spending by companies and employees affected and this would knock on to a general hit to employment and government revenues. The analysis suggests that employment levels could be 40,000 lower after 10 years and the unemployment rate could be close to two percentage points higher.