Bemis already employs 200 at Campsite Industrial Estate in the city 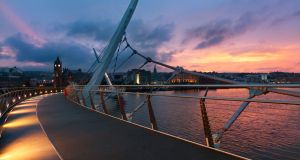 The Peace Bridge over the river Foyle in Derry. Bemis plans to have 95 new jobs in place in the city by 2021. Photograph: iStock

US packaging giant Bemis Company plans to expand its Northern Ireland operations and establish a new European business services centre in Derry which could create 95 jobs.

Marty Scaminaci, Bemis’s vice-president of global business services, said the new centre in Derry was a “strategic investment” which he believed would “help drive efficiencies” within the business.

“We have successfully operated a manufacturing facility in Northern Ireland since 1996, and know it to be a great location to do business. The availability of skilled graduates in the area, engagement of local council representatives, and the support offered from Invest NI were all critical factors in our decision to locate this centre in Northern Ireland,” he said.

Invest NI chief executive Alastair Hamilton said the company’s decision to expand its investment in the North was a “significant coup”.

“A number of other locations were considered for this project, but as a result of the collaborative efforts of Invest NI and Derry City and Strabane District Council, we successfully pitched the city as an attractive investment location. The company has been offered £695,000 (€806,000) of government support towards the recruitment of the new jobs.”