Betrayal is the US president’s stock in trade, just ask Steve Bannon 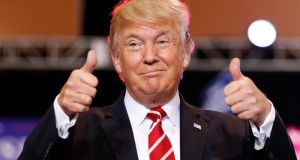 President Donald Trump will betray the US working class, it’s what he does. Photograph: AP

With Steve Bannon out of the White House, it’s clearer than ever that President Donald Trump’s promise to be a populist fighting for ordinary workers was worth about as much as any other Trump promise – that is, nothing.

His agenda, such as it is, amounts to reverse Robin Hood with extra racism – the conventional Republican strategy of taking from struggling families to give to the rich, while distracting lower-income whites by attacking Those People, with the only difference being just how blatantly he plays the race card.

At first sight, however, the Trump version of this strategy doesn’t seem to be going very well. The attempt to repeal Obamacare was almost a caricature of trickle-down policy – take health coverage away from 20-plus million Americans while cutting taxes on a handful of wealthy individuals. But it was massively unpopular, and appears to have failed in Congress.

The next item on the agenda, tax “reform,” may not fare much better. I use scare quotes because a true reform, reducing some tax rates but making up for the lost revenue by closing loopholes, was never going to happen.

Straight-out tax cuts, which benefit corporations and the wealthy while blowing up the deficit, might still go through, but even that looks doubtful. So is the Trump agenda dead?

Not necessarily, because trickle-down has never been the whole story of the Republican assault on workers. Or to put it another way: don’t just watch Congress, keep your eyes on what federal agencies are doing.

When you step back and take the long view on trickle-down policies, what you realise is that Trump’s legislative failure is more the rule than the exception.

The election of Ronald Reagan was supposed to have set America on a path toward lower taxes and smaller government – and it did, for a while. But those changes have largely been reversed.

According to the Congressional Budget Office, back in 1980 the top 1 per cent paid 33 per cent of its income in federal taxes. Under Reagan, that share briefly fell below 25 per cent. But as of 2013, the most recent year covered, Obama’s tax hikes had brought federal taxes on the 1 percent back up to 34 per cent of income.

What about safety net programmes? Some were savagely cut – but others have grown, a lot. Take Medicaid, which in 1980 covered only 7 per cent of non-elderly Americans. Today that number is up to 21 per cent.

Looking only at taxing and spending, then, one might conclude that the conservative economic agenda has largely failed. But here’s the thing: While the rich still pay taxes and the safety net has in some ways gotten stronger, the decades since Reagan have nonetheless been marked by vastly increased inequality, with stagnating wages for most, but soaring incomes for a tiny elite.

How did that happen? Yes, globalisation probably played some role, as did technology. But other wealthy countries, just as exposed to the winds of global change, haven’t seen anything like America’s headlong rush into a new Gilded Age.

To understand what happened to us, and in particular to American workers, you need to look at policy – and especially the kind of policy that often flies under the media’s radar. Take one example, covered a few months ago in a striking Times essay: the decline in the fortunes of truck drivers, whose pay used to make them members of the middle class.

No more: Their real wages have fallen about a third since the 1970s, with most of the decline taking place during the Reagan years. Now, globalisation and technology haven’t destroyed trucking jobs; on the contrary, the industry is facing a labour shortage. What happened to truckers was, basically, the collapse of their bargaining power due in part to a changed ideological climate – not least at the National Labor Relations Board – that encouraged private employers to fight unionisation, and in part to deregulation that undercut the position of unionised firms.

Take another example, at the opposite end of the spectrum: does anyone doubt that financial deregulation played an important role in surging incomes at the very top of the income distribution?

Which brings us back to Trump and the effect he’ll have on America’s working class. Right now it looks as if he may have much less effect on taxing and spending than most people expected. But other policies, often made administratively by federal agencies rather than via legislation, can matter a lot.

True, Trump failed in his attempt to appoint a deeply anti-labour, minimum wage opponent and fast-food executive to head the Labor Department. But the fact that he even tried to appoint Andrew Puzder tells you a great deal.

The point is that progressives shouldn’t celebrate too much over Trump’s legislative failures. As long as he’s in office, he retains a lot of power to betray the working people who supported him. And in case you haven’t noticed, betraying those who trust him is a Trump speciality.