Former Trabant factory begins turning out the most modern VW ever 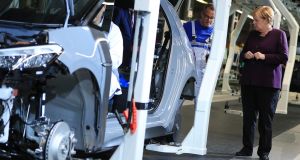 Expectations were high on Monday when Angela Merkel arrived in Saxony for a four-wheeled celebration of German unity. The entire board of German auto giant Volkswagen had decamped east to Zwickau, near the Czech border, to mark the start of production of a new electric car.

VW hopes the ID.3 will secure the company’s future and, one-day, prove as iconic as both the Beetle and the Golf.

Only time will tell if, after countless false dawns, the new VW model is the German car industry’s first mass-market electric car. But even as the production line began moving this week in Zwickau, VW has tapped into a tradition here that stretches back more than a century.

It was in Zwickau in 1909 that engineer August Horch launched the first Audi – now a luxury car brand inside the VW group. After the second World War, with its Zwickau plant in ruins and inside the Soviet zone, Audi headed south to Bavaria. The Zwickau plant, rebuilt and nationalised, began turning out East Germany’s answer to the Beetle: the Trabant.

Mocked for its plastic body and two-stroke engine, easterners may now have the last laugh as the former Trabant factory begins turning out the most modern VW ever.

If successful, the all-electric hatchback will boost Germany’s economically weak border region and, in turn, help VW turn two corners – diesel fraud and the internal combustion engine. For the car giant, the ID.3 and Zwickau are a €1.2 billion gamble – on eastern Germany and electric mobility.

“With the ID.3 we are pulling electromobility out of the niche,” said Herbert Diess, Volkswagen CEO.

Chancellor Merkel was born in Hamburg but raised in socialist East Germany and is well aware of Saxony’s engineering tradition. With uncharacteristic certainty, she predicted Zwickau would become “a pillar of the future of the German automobile industry”, adding: “The Saxons can do it.”

Dr Merkel isn’t the only one hoping the ID.3 launch is a turning point in the united Germany’s transformation process that began with the collapse of the Berlin Wall, 30 years ago on Saturday.

Unification was – to use corporate jargon – less a merger of equals and more a friendly take-over. And the takeover became increasingly frosty on each side as it became apparent how difficult – and costly – it would be to integrate two economies after four post-war decades on diverging paths.

“The bottom line is that development since reunification has been extremely positive,” said Christian Hirte, the government’s commissioner for eastern and unification affairs. “The situation in the east is much better than its reputation.”

After losing the second World War, two German states – capitalist and socialist – were founded in 1949. It wasn’t until 1961, though, that socialist East Germany closed its 1,400km north-to-south border to the west, cutting the country in two.

A second border, the 155km wall erected by East Berlin, turned the western half of the city – occupied by the US, British and French allies – into a capitalist island surrounded by the socialist east. Dubbed an “anti-fascist protection wall” by the Soviet-backed East German state, the real reasons behind the Berlin Wall was economic: to halt a haemorrhage of capital and trained workers to the west.

It was 28 years before people power secured the wall’s collapse 30 years ago. But the hated structure had been hollowed out already by inescapable economic realities: a planned economy, inefficient factories and product shortages.

Three decades on, bleak East German humour has lost none of its bite: “A customer asks a store assistant: ‘Have you no towels?’ The assistant replies: ‘No towels is one floor up, we’re no bed linen’.”

For many in Germany Saturday’s anniversary of the Berlin Wall’s fall has sparked the latest round of soul-searching over two questions.

The first question: was East Germany’s economic collapse inevitable? There will never be a definitive answer but many economic experts say East Germany, though not bankrupt in November 1989, was sailing dangerously close to the edge.

When long-time East German leader Erich Honecker was ousted in October 1989, his successor Egon Krenz demanded a full report into the state’s finances. It made for bleak reading: years of under-investment meant productivity in the eastern German Democratic Republic (GDR) was 40 per cent behind West Germany with a national debt that “calls into question GDR solvency”.

Honecker-era subsidies on living costs, from bread to rent, had exploded from eight billion Ostmark in 1970 to 58 billion marks in 1989 – a sixth of the country’s economic output.

The report offered East Germany two rescue options: accept another multibillion loan from West Germany, as it did in the early 1980s, or cut living standards by up to 30 per cent. But no new loans were on offer from Bonn and Krenz knew the second option would cause civil war.

That East Germany even made it to its 40th birthday was thanks to bending the rules of socialism behind the scenes, through its secretive “commercial co-ordination” department. Known locally as “KoKo”, the department existed outside the East German economy, controlled around 180 brass-plate firms and bankrolled East Germany over 30 years with earnings of €25 billion deutschmarks (€12.8 billion).

Its trade agreements suited both East Germany and western Europe, but early deals in the 1960s – to manufacture and export good-quality, low-cost consumer goods from washing machines to cameras – soon slipped into more dubious terrain.

Long before western companies discovered Asian sweatshops, they struck deals with East Berlin. Ikea was one such customer, signing contracts to have its products prepared and packaged by East German forced labour.

Then there was the trade in waste: over three decades, West Germany paid East Germany’s KoKo DM870 million (€444 million) to accept millions of tonnes of household rubbish and toxic factory effluent.

By the late 1980s East Germany’s free-market wizards in KoKo were selling artworks, arms and political prisoners: the latter at €96,000 a head to West Germany. Between 1985 and 1987, this lucrative human trafficking trade earned East Berlin nearly DM650 million (€332 million).

By late 1989, however, not even KoKo income could patch the holes in East Berlin’s balance sheet. Krenz boarded a plane for Moscow but Mikhail Gorbachev sent him home empty-handed.

That was November 1st. Eight days later, Krenz agreed new visa-free travel, the borders were opened and the Berlin Wall was breached. A whirlwind 11 months later, German unification was sealed in an emotional ceremony of flags and fireworks.

Standing on the steps of the Reichstag in Berlin on October 3rd, 1990 was a weeping West German chancellor Helmut Kohl. When he regained his composure, he secured a fresh election mandate by promising easterners “blossoming landscapes”. An unprecedented three-decade investment and transformation process began.

Eastern Germany is today unrecognisable from the old economic and environmental disaster that was the GDR. For one thing, the air is clear: polluting chemical factories, two-stroke engines and lignite stove heating have largely vanished. The road and rail network has been almost entirely replaced. The home state of the new ID.4 dubs itself “Silicon Saxony”, and the area around the capital, Dresden, hosts eastern Germany’s highest concentration of tech companies and start-ups outside Berlin.

Leipzig, Saxony’s second city, has regained its historic role as a base for trade and industrial fairs. According to Germany’s unification report update 2019, the Leipzig region has a per-head GDP of 98 per cent of the European average. Even weaker regions are catching up: Dr Merkel’s constituency on the Baltic coast, for instance, now has 83 per cent per capita GDP.

“The east German regions have an economic capacity comparable to many French, Italian or British regions,” notes the 2019 official unification report.

But eastern Germany is now a tale of two countries.

“Many eastern German regions are still marked by structural weakness where, parallel to dropping jobless rate, is a dropping population,” the report adds. Vanishing shops, doctors and young people has triggered a flight from the land, contributing to a housing crisis in cities.

How much did unification cost?

Ahead of Saturday’s anniversary, the second big question on Germans’ minds is: how much did unification cost? Working that out is a complicated, almost impossible task but the Bundestag’s own economic analysts have come up with a number: €1.6 trillion.

That includes all investment, cash transfers and top-ups of easterner pensions – and it was financed largely by a levy on salaries of all working Germans, east and west. The investment has helped smooth out vast economic gaps in living standards and the cost of living. But, for easterners, a 17 per cent earning gap still persists.

They not only earn less, many work more. In the steel sector, for instance, their three additional hours a week were crucial in attracting German car companies and their suppliers to the east. As well as VW in Zwickau, Porsche has a factory in Dresden and Thyssen-Krupp is in Saxony-Anhalt.

Big-name arrivals have had a positive effect on the jobless rate: where eastern unemployment was double the western rate in 1991 – and rose to 18 per cent in 1999 – the percentage of out of work eastern Germans has shrunk now to 6.1, compared to 4.6 per cent in the west.

But economists say eastern Germany’s economic future hinges on whether it can rediscover its entrepreneurial spirit. As with mentality, that too is hobbled by another long-term economic effect of German division: wealth levels.

Former West Germans, after 70 years in market capitalism, have accumulated, on average, personal wealth of €92,500. For eastern Germans, however, living in a socialist state meant no tradition – and often no means – of acquiring property or owning a business. After 30 years of market capitalism, the average easterner has just €23,400 in personal wealth, a quarter of westerners.

That leaves little financial buffer should disaster strike, and little for parents to pass on to their children.

As Germany gears up for Saturday’s 30th anniversary, feelings have begun to overtake statistics. Some 57 per cent of citizens in eastern Germany say they feel like second-class citizens, according to the federal government’s own unification report, and just 38 per cent of easterners view unification as a success.

Tapping into this dissatisfaction is the far-right Alternative für Deutschland (AfD). Though polling 13 per cent nationally, it captured 28 per cent support in September’s state election in Saxony.

Last Monday, after Chancellor Merkel and the VW suits left Zwickau, Saxon workers got to work assembling the new ID.3 electric car. But, at €30,000, not everyone here will be able to afford one.