Willie Walsh to retire as IAG boss within next two years

People travelling with Aer Lingus up 2.8% in the year to date compared with last year 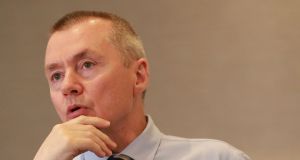 Willie Walsh: ‘I still love what I do, but my intention is to be retired within the next two years.’ Photograph: Nick Bradshaw

Willie Walsh, the chief executive of Aer Lingus owner IAG, said on Friday he planned to retire within the next two years.

“I have indicated that I’m clearly getting closer to retirement ... the board has been working for some time, as you would expect, on succession planning,” Mr Walsh said at IAG’s annual capital markets day.

He plans to retire before his 60th birthday on October 25th, 2021, the former Aer Lingus boss said.

“I still love what I do, but my intention is to be retired within the next two years.”

It emerged on Friday that IAG will almost halve its planned expansion, reducing expected earnings growth, as it responds to slowing economies and a glut of seats that has depressed prices.

The group said Aer Lingus grew its passenger numbers by 1.1 per cent last month compared with the same period the year before.

Revenue passenger kilometres, a metric which is calculated by multiplying the number of revenue-paying passengers aboard by the distance travelled, increased by 4.8 per cent.

In the year to date, Aer Lingus’s passenger numbers were up 2.8 per cent compared with the first 10 months of 2018, while the revenue passenger kilometres metric was up 5.4 per cent.

Passenger load factor, which measures the percentage of available seating capacity that is filled with passengers, was up 2.6 points in October compared with the same period last year, and up 0.3 per cent in the year to date compared with the first ten months of 2018.

Mr Walsh told the capital markets event that earnings per share to 2022 will rise at a 10 per cent pace instead of 12 per cent. Capital spending will rise 80 per cent to €4.7 billion. IAG said at the end of last month that full-year profit will be lower than forecast as it grapples with the impact of BA’s first pilot strike since 1979. – Additional reporting: Bloomberg/Reuters