Total sales this year are down 7% compared to an 8.7% increase in imports 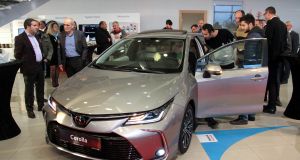 The best selling car this year is the Toyota Corolla with 4,388 registrations, ahead fo the Hyundai Tucson with 3,816, and the Nissan Qashqai with 3,744.

New car sales rose 29.3 per cent in October, albeit in a traditionally quiet month for the motor trade. New car registrations were 2,184, bringing the total so far this yar to 116,129. That’s down 7 per cent on last year.

In contrast, the number of used imports continues to grow, with 93,893 registered so far this year, up 8.65 per cent on last year. In last month’s budget, the Government introduced a new NOx tax due to come into force from January 1st that will particularly hit older used diesel imports. Diesel cars accounted for 72 per cent of used imports so far this year. In terms of age, 32 per cent of car imported were between four and five years old, while 25.5 per cent were between six and nine years on the road.

Back in the new car market, the surge in electric car sales continues, with 3,222 registrations so far this year, giving it a 2.8 per cent share of the new car market. Diesel makes up 46.64 per cent, with petrol comprising 40.7 per cent.

Volkswagen has overtaken Toyota in terms of the best-selling car brand, with 13,422 registrations compared to Toyota’s 12,001. Hyundai is in third place with 10.974. At the premium end of hte market Audi - with 4,576 registrations - has built up a significant lead over rivals BMW, which has 3,967, although both have recorded drops in new car sales this year.

The best selling car this year is the Toyota Corolla with 4,388 registrations, ahead fo the Hyundai Tucson with 3,816, and the Nissan Qashqai with 3,744.

According to Brian Cooke, director general of the Society of the Irish Motor Industry: “ The impact of Brexit and sterling weakness continues to drive used car imports which is impacting negatively on the new car market. Despite the uncertain trading environment facing our industry, focus is quickly turning to next year and the 2020 registration plate, with some recovery in the new car market vital in reducing Ireland’s emissions from transport.”