VW and Ford to share self-driving and electric car tech

Latest move will speed up commercial rollout of self-driving vehicles, while Ford will get a new electric car model for Europe 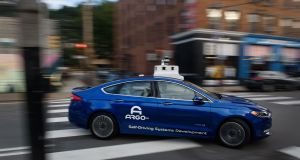 Volkswagen Group is to invest in Ford’s autonomous vehicle venture, Argo AI, in a deal that deepens the alliance between two of the world’s largest auto giants. Photograph: Bloomberg via Getty

Volkswagen Group is to invest in Ford’s autonomous vehicle venture, Argo AI, in a deal that deepens the alliance between two of the world’s largest auto giants. Along with investing $1 billion (€888 million) in capital, Argo AI will also subsume VW Group’s current autonomous vehicle unit, which has assets valued at $2.6 billion and more than 200 employees.

The latest deal also sees Ford gaining access to VW’s electric vehicle architecture, on which the US company plans to design a new electric car for the European market, which will be built in Germany and go on sale in 2023. Ford said it expects to deliver more than 600,000 electric vehicles built on the VW electric architecture in Europe.

Volkswagen is spending some €30 billion on the industry’s most aggressive rollout of electric cars, with dedicated underpinnings and plants that exclusively make battery cars. Adding more vehicles to production lines would help gain scale and save costs, and offer Ford a platform to better comply with tougher rules on carbon-dioxide emissions in Europe.

Unprecedented shifts facing the auto industry are forcing players to consider new partnerships and potential consolidation. VW, the world’s top automaker, offers the industry’s most ambitious roll-out of electric models, while Ford, also in the top 10, is developing advanced self-driving technology with Argo.

For VW, the Argo investment is largely a defensive move, helping the German manufacturer to compete with Alphabet’s Waymo, and General Motors’ Cruise unit and the rival Daimler and Bosch partnership. Road tests and accumulating huge amounts of data are critical for the further development of self-driving cars, and few apart from Waymo are equipped to do it alone. However, Argo still lags behind Waymo, Cruise and the Daimler-Bosch co-operation.

Argo AI was formed in 2016 by Bryan Salesky, an early leader in Google’s self-driving programme, and Peter Rander, who helped pioneer Uber’s autonomous efforts, with $1 billion in backing from Ford.

For Ford, a deal with VW fits with chief executive Jim Hackett’s $11 billion overhaul of the company, which includes shifting to focus on commercial vehicles in Europe.

Geographically, the companies complement each other, with Ford strong in the US and VW a leader in Europe and China.

The two companies are already working together on future commercial vehicles and pick-up SUVs. Ford is engineering a pick-up for both brands that is due to go on sale in 2022, along with a range of large vans. In turn, VW is working on a city van for both brands.

Announcing the latest deal, Ford chief executive Jim Hackett said: “While Ford and Volkswagen remain independent and fiercely competitive in the marketplace, teaming up and working with Argo AI on this important technology allows us to deliver un-matched capability, scale and geographic reach.

“Unlocking the synergies across a range of areas allows us to showcase the power of our global alliance in this era of smart vehicles for a smart world,” he said. – Additional reporting: Bloomberg/Reuters