Norwegian founder Bjorn Kjos to step down as chief executive

Kjos will remain as an adviser to the carrier 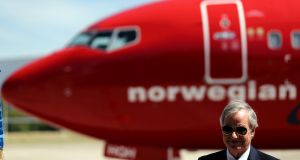 Bjorn Kjos is to step down as chief executive of Norwegian Group. Photograph: Marcos Brindicci/File Photo/Reuters

Bjorn Kjos, a pioneer of low-cost travel as co-founder of Norwegian Air Shuttle ASA, is stepping down as chief executive after steering the carrier through a debt crisis that resulted from rapid expansion.

Mr Kjos, who helped found Norwegian in 1993, will leave the CEO post immediately, the company said Thursday in a statement. He will continue to serve as an adviser to the chairman. Chief financial officer Geir Karlsen will become interim CEO until a permanent successor is found.

After that market proved tough to crack, the 72-year-old executive altered course to target low-cost long-haul flights, challenging giants such as British Airways on trans-Atlantic routes. His heavily discounted fares proved popular with the public but margins were thin and fleet costs stretched the balance sheet to breaking point.

Over the past year, he’s reversed the growth trajectory to stabilise the company and preserve profit. The turnaround picked up pace in the second quarter, as earnings before interest and tax more than tripled to 622.8 million kroner.

The improvement has been secured by dropping the worst-performing routes, slowing aircraft deliveries and generally reining in the pace of growth. – Bloomberg