Ryanair turbulence due to Boeing delays and tough times for airlines

Analysis: Pilots are not leaving the airline at the same rate as before as there are fewer opportunities outside the company 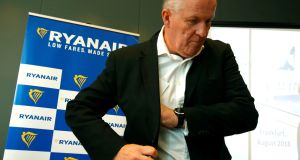 Chief Operating Officer Peter Bellew, who is leaving the company in coming months, told pilots in a letter this week that delays in the delivery of the Max could result in the carrier closing and/or cutting back bases

Delays in the delivery of new aircraft and tough trading conditions for European airlines have left Ryanair with too many pilots, its chief operating officer, Peter Bellew, warned earlier this week.

Ryanair is considering closing or cutting back bases over the winter and possibly into next summer while it waits for the delayed arrival of 50 recently launched Boeing 737 Max aircraft. Regulators have grounded this new version of plane while its manufacturer deals with safety problems.

The Irish airline was due to receive 25 of these craft from Boeing in the final three months of this year and a further 25 in the opening quarter of 2020.

While the US manufacturer hopes the Max will be airborne again in the autumn, the delays mean that Ryanair is unlikely to receive the new craft on schedule.

As it takes time to put a new aircraft into service, this means that the airlines faces a further wait before it can begin flying the new planes.

Mr Bellew, who is leaving the company in coming months, told pilots in a letter this week that delays in the delivery of the Max could result in the carrier closing and/or cutting back bases. “We are currently revising out schedules and what the implications will be at base level for aircraft allocations,” he said.

The letter does not say which bases Ryanair could close or cut back as it is still finalising those plans.

His letter estimated that Ryanair had 300 more pilots than it needed, and said that any knock-on effects of the Max delivery delays could worsen this.

The airline stopped hiring captains two months ago as resignations “all but dried up” according to its chief operating officer.

Pilots are not leaving the airline at the same rate as before as there are fewer opportunities outside the company. European air travel is particularly competitive.

Airlines, such as Icelandic carrier, Wow, have been folding, while others such as Norwegian, which has a substantial Irish presence, have been cutting back. Added to that, air fares are low, fuel prices have risen and the industry is nervous about political developments such as Brexit.

It is thought there is no immediate threat of redundancies at Ryanair, but the airline is offering pilots extended unpaid leave or job shares over the winter. Mr Bellew’s letter pointed out that applications for these had so far fallen short and urged pilots to apply for them.

A lot hinges on what happens next with the Boeing 737 Max. Aviation regulators in Europe, the US and elsewhere grounded the craft earlier this year following two crashes blamed on problems with its software.

Its maker’s predictions of when it will be airworthy again have shifted around in recent months, hitting all customers, not just Ryanair.

Michael O’Leary, Ryanair’s chief executive, told news agency Bloomberg this week that the company could have to cut back on its growth plans if the delays with the Boeing 737 Max continue.

“We need a delivery schedule: When is the aircraft going to be back flying? And we need a date, not some kind of speculation.”

Meanwhile, reports on Thursday said that Mr Bellew will leave Ryanair at the end of the year. He rejoined the Irish carrier from Malaysia Airlines, where he was chief executive, in late 2017.

He returned to Ryanair when relations between it and its pilots had reached a crisis, following a rostering mix-up that forced the airline to cancel flights in late 2017 and early 2018. The company subsequently agreed to recognise trade unions, reversing a long-standing industrial relations policy.

When Mr Bellew rejoined, there was speculation that he could ultimately succeed Mr O’Leary as Ryanair chief executive. Mr O’Leary said last year that he intends to stay on for some years.