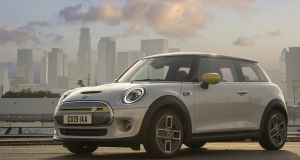 Mini has revealed its first electric model, the Mini Cooper SE, and it will go on sale in Ireland later this year at a price of €27,765 or €309 per month on a PCP finance plan

Way back in 2009, Mini built a pilot run of all-electric cars, which it leased to BMW senior staff and selected members of the public. The idea was to research how an electric car would be used; how often it would be charged; how far it would be driven. The cars were basically prototypes, though, and the battery pack was so large and hefty that it meant removing the back seats entirely.

Ten years on, we’re finally going to get a proper, fully-productionised all-electric Mini. Well, nearly. You can order your Mini Cooper SE now, but deliveries won’t begin until March of 2020.

Mini, as a brand, seems excited by this, with one senior member of staff telling The Irish Times that: “For us, if you look back to the birth of Mini, how it was born out of the Suez crisis, this feels like a turning point, the switch to electric. It still has that Mini excitement.”

James Redmond goes further. The Dundalk native, who’s has been working to integrate the new battery electric powertrain into the existing Mini bodyshell, reckons that the Mini E, as it will be called, will make some serious electric waves when it arrives. “this feels like a pretty pivotal moment, jumping into the electric car world. We’ve got a car that’ll make serious headlines for its performance, so with the 60th anniversary, it’s super to see where it’s going to go” Redmond told The Irish Times. “The battery pack weighs around 250kg all on its own, so it is heavier than a standard car for sure. That’s more than a full fuel tank. We had to modify the rear seat a little to fit the battery pack in there, so there’s a few extra kilos. It really shifts though, it feels like a John Cooper Works to drive. My daily car is an E46 M3 3.2-litre at the moment, and the Mini BEV does not disappoint when it comes to acceleration. And it has such good handling too. We’ve changed the dampers and the suspension, in part to make sure that it doesn’t sit up like a tractor. But no, it looks perfect and it feels perfect.”

The Mini SE will share some of its electric parts with the BMW i3, but while that car is an exotic - built on a dedicated production line, and made largely of hugely expensive carbon-fibre - the Mini shares a steel body and chassis with its conventional petrol and diesel brethren, and will be built on the same production line in Mini’s huge factory near Oxford. That in itself was a major challenge, according to Redmond.

“Integrating it into the plant, the factory, was a huge thing” he said. “Where you saw the current cars getting their engines installed, the ‘marriage’, that’s done with engine mounts. Usually there’s one on the engine itself, and one on the gearbox, and you marry that up and they have to be in an exact location using mounting points on the body. Now, though, we’re using this frame that is a welded structure, and that alone presents challenges because there are always going to be weld deviations, and we have pretty tight tolerances in which we have to work and control it for quality. This has to go into the factory and marry up perfectly, it’s proper precision engineering.”

Taking a car designed around petrol power and converting it to electric was not as straightforward as it sounds, either. The empty space of the engine bay quickly became filled with an electric motor and its control unit, and a vastly changed cooling system, purpose built for keeping the batteries cold when it’s hot out, and vice-versa. And then they had to make it pass crash-test standards… “For us the front of a Mini E was never intended for a front-on crash with a high-voltage system” said Redmond. “There are a number of safety tests that we can do, such as with a front impact into a pole, you need to be able to shut down the high-voltage system. So the milliseconds of time we need to do that, that meant we had to have a protective frame around the high-voltage components. So with that in place, it meant that once a crash was detected, the system could shut down before the car starts to go through its crumple zones, or before there was any distortion to that frame, so we’re eliminating any risk.

“That frame then became effectively the carrier for all of the electric drive components. So it started out as purely a safety device, and turned into a real central component, for parts, clipping points. That frame was very, very complicated.”

Even though it’s based on the existing Mini, and built in the same factory, the SE’s development was sufficiently complicated that it’s taken since September 2016 to get this far, and production will not actually start until November of this year.

Redmond is certain that the performance will make it worth the wait. “The experience is different. With a petrol, you’re used to planting your foot and watching the needles climb, and then we got hooked on diesels and turbo diesels, and then you had turbo lag. And maybe with the old 535d we got past turbo lag, and the car would go like a mad thing. And now, with BEV, you’ve got turbo power with no turbo. As quick as you’re putting your foot to the floor, the speed is coming up. It’s instant torque. Every bit of space gets used up. Issigonis would be proud. It’s super to see in the 60th anniversary.”

‘I might be crazy’: The people who set up new businesses during Covid
9

Why Waterford is ‘the best Covid county in Ireland’
10