Tesla gains traction in Europe as Model 3 takes off 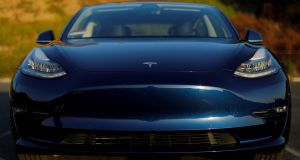 Tesla’s push to deliver more cars in June appears to have had an impact in Europe, with a sharp rise in registrations over the previous month.

Data on last month’s European car sales is trickling in, and the first countries reporting numbers point to Tesla gaining further ground in key markets like Norway and the Netherlands, where the electric car-maker’s registrations surpassed 2,500 for the first time.

Despite a slowdown in the overall automotive market, Tesla should now be within touching distance of its target for at least 90,000 deliveries a quarter. Analysts expect the car-maker to report this week that it shipped 88,000 cars in the three months through June.

European deliveries have been notably lumpy, with a big spike in March as the Model 3 reached the continent’s shores in large numbers, followed by a couple of less impressive months.

A representative for Tesla was not immediately available for comment.

In Denmark, 426 Teslas were registered in June, more than quadruple the total for all of 2018. It was a late dash with more than a third of registrations coming in the last week of the month.

Incentives and tax credits in Canada and the US, as well as demand from countries such as Norway and the Netherlands, are giving Tesla a shot at coming close to the record 90,700 cars the company delivered in the last three months of 2018, according to analysts.

The market is underestimating quarterly Model 3 volumes as demand in the US recovers and Tesla had three full months of exporting the car, JMP Securities’ Joseph Osha wrote in a note to clients.

JMP’s total unit delivery estimate for the quarter is 97,000, “with all of the upside coming from Model 3 volume”, Mr Osha said. – Bloomberg