European Cockpit Association calls on investors to back ‘necessary changes’ 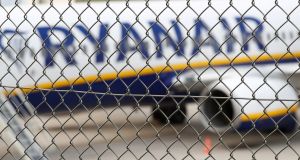 Ryanair agreed to recognise trade unions in December and said it had reached deals with organisations representing about 60 per cent of pilots and cabin crew across its network. Photograph: Reuters

A European trade union group is demanding that Ryanair offer contract pilots direct employment from the beginning of 2019.

Shareholders are due to attend the Irish airline’s annual general meeting at the City North Hotel in Gormanston, Co Meath, on Wednesday following months of industrial relations turbulence at the company.

Ahead of the meeting, the European Cockpit Association (ECA), an organisation of pilots’ unions, called on investors to back the “necessary changes” on the board and management to allow for a fresh start on talks with labour groups.

Philip von Schoppenthau, ECA secretary general, argued that pilots had set out what it would take to address their concerns and prevent them leaving Ryanair for jobs with competitor carriers.

“One of the most powerful signals of goodwill from management would be to offer immediately to every contractor pilot to move – by January 1st, 2019 – to a direct employment contract rather than the precarious Irish broker agency contracts,” he said.

“All contracts should also be governed by the local law of the country where the pilot is based,” Mr von Schoppenthau added.

Ryanair responded that: “Any such commentary from a Lufthansa pilot should be dismissed.”

European pilot unions, including Germany’s Vereinegung Cockpit and Dutch Alpa, highlighted contracts as one of the grievances behind a one-day strike last month.

Ryanair agreed to recognise trade unions in December and said that it had reached deals with organisations representing about 60 per cent of pilots and cabin crew across its network.

Dirk Polloczek, ECA president, said that despite these assurances, the company’s approach was largely unchanged.

“Management simply appears unable to talk to its own employees in a constructive manner and without falling back on its old and unhelpful habits,” he said.

The ECA said the “obvious question” for investors was whether current management could ensure a smooth transition to a unionised airline.

Meanwhile, the British Airline Pilots’ Association, one of the first unions to sign a recognition deal with Ryanair, predicted on Wednesday that industrial unrest could continue at the carrier for the foreseeable future.