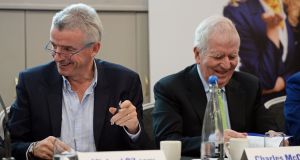 Ryanair is due to hold its annual general meeting (agm) next Thursday, where shareholders will among other things elect members of the airline’s board.

Notices circulated to shareholders show that neither Mr McCreevy nor Mr McKeon – both long-standing board members – is seeking re-election as an independent director. They are the only directors not seeking a fresh term.

The board elected Ms Daly at a meeting last December, and Ms Brennan in May. Next Thursday will be the first time that either faces a Ryanair shareholders’ vote.

The move from Mr McCreevy and Mr McKeon comes as advisory firms such as Glass Lewis and Pension & Investment Research Consultancy urge shareholders to oppose the re-election of key figures such as chief executive Michael O’Leary and chairman David Bonderman. However, there is no indication that these calls influenced either Mr McCreevy’s or Mr McKeon’s decision to step down as Ryanair directors. It is understood that both decided several months ago not to put themselves forward.

Both became Ryanair board members in May 2010, and were re-elected at all subsequent annual shareholder meetings.

Mr McCreevy is the better known of the pair. A retired politician, he served as a European commissioner and minister for finance in the Fianna Fáil-PD coalition between 1997 and 2004. In previous administrations he was minister for social welfare and minister for tourism and trade.

Mr McKeon was previously an audit partner with PwC. He is an independent director of clinical research and medical device specialist Icon plc.

By taking up the vacancies left by Mr McCreevy and Mr McKeon, Ms Daly and Ms Brennan will bring female representation on Ryanair’s board to four out of 12. The airline is one of many Irish plcs that have drawn fire for the lack of women on their boards.

Ms Daly chairs insurer RSA Ireland, and is a non-executive director of Chetwood Financial. She previously served as a director of lender Permanent TSB and payment systems specialist Payzone.

Ms Brennan is on the board of State forestry group Coillte, retail group Musgrave and Dell Bank International. She is a former director of distributor DCC.

Ryanair has reacted to advisory firms’ calls to oppose the reappointments of Mr O’Leary, Mr Bonderman and other directors by predicting that shareholders will vote for their election by a large majority.

1 Who are Ireland’s 17 billionaires?
2 Report claims liquid natural gas plant not needed in Republic – Wallace
3 Ireland has fifth-largest number of billionaires per capita in the world, says Oxfam
4 Barclays to cut 100 senior roles as lender seeks to rein in costs
5 Giving your child a mobile phone: The pros and the cons
6 Boeing’s 737 Max will fly again in 2020, Avolon predicts
7 Ryanair suing Skyscanner for allegedly selling flights through its domain
8 Phil Hogan to address business leaders at IDA event at Davos
9 How to . . . enable the Windows 10 dark theme – and why
10 Billionaire Mike Ashley’s big plans for Sports Direct in Ireland
Real news has value SUBSCRIBE