Mistakes on a plane: Cathay Pacific spells own name incorrectly 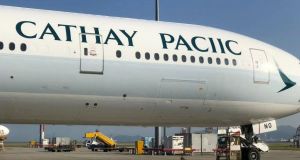 Cathay Pacific has given visitors to Hong Kong airport a surprise by spelling its name wrong on the side of a plane. The Boeing jet was emblazoned with the words “Cathay Paciic”.

The company’s social media team saw the funny side of the error, tweeting that the plane was being sent back to be repainted.

The image had been posted on the Hong Kong Aviation Discussion Board, a Facebook group for plane spotters.

While the airline insisted the spelling error was a genuine mistake, some had their doubts. An engineer for Haeco, a maintenance company operating in the region, told the South China Morning Post: “The spacing is too on point for a mishap. We have stencils. [There] should be a blank gap in between letters if it was a real mistake.”

The plane, a Boeing 777-367, had flown overnight from Xiamen in China, where Haeco carries out maintenance for the airline. It arrived in Hong Kong in the early hours of Wednesday morning, having been part of the fleet since 2004.

Social media users were quick to joke about the mishap.

The airline’s in-flight entertainment manager also got in on the act. – Guardian service