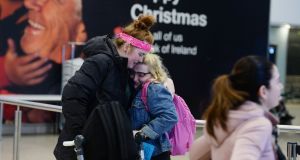 Chief medical officer Dr Tony Holohan has poured cold water on hopes that air travel restrictions can be eased ahead of Christmas.

“International travel is not safe and movement of people around areas with high incidence of this disease, particularly in Europe and North America, is not safe,” he told the Oireachtas transport committee.

Dr Holohan was responding to questions from committee members about the possibility of restrictions on air travel being eased to allow people fly home for Christmas.

He suggested that the situation in other European countries with high rates of Covid-19 could worsen by Christmas.

Dr Holohan explained that advice to the Government from the National Public Health Emergency Team (Nphet), which he chairs, would be based on infection rates in the Republic and in countries connected to it by international travel.

He added that it was not possible to predict what these would be in several weeks’ time. “We are still six weeks out from this,” he said.

The public health official said virus rates would have to be at similarly low levels both in the Republic and internationally to cut the risks he maintained were tied to air travel.

Airlines Aer Lingus and Ryanair are cutting or suspending flights from airports including Cork, Knock and Shannon this month, but hope to restart operations in mid-December ahead of Christmas.

Nphet is one of the bodies advising the Government on plans to implement the EU’s traffic light system for travel from next Sunday, when it is due to come into force.

This grades regions as green, orange and red, according to their virus infection rates, with green being the lowest and red the highest.

The EU originally recommended member states allow free movement for those from green and orange areas, with Covid tests replacing the need for quarantines for travellers from red regions.

However, foreign ministers subsequently agreed that individual countries could continue to impose their own restrictions on those from orange and red zones.

Dr Holohan said virus transmission was out of control in many EU countries, adding that many could get “redder and redder” in coming weeks.

He noted that the UK and most EU states were implementing restrictions similar to those imposed from last week on the Republic, where he said there were signs that infection rates were falling again.

Dr Holohan also said negative Covid test results on their own would not provide sufficient safeguards against the risks associated with international travel.

“Our experts and many of their counterparts internationally consider that, should testing of asymptomatic passengers be introduced, a five- to seven-day period of restricted movement, with a symptom check and test on day five, is the most efficient means of containing importation of the virus,” he told the committee in his opening statement.

EU countries including Italy and Germany have introduced pre-departure tests at airports.

State-owned Dublin, Cork and Shannon Airports hope to do the same to tie with overall efforts across the bloc to increase travel.

However, Dr Holohan did indicate that if current infection trends continued, the Level 5 lockdown restrictions could ease from December 1st.

“We are optimistic that we will find ourselves in a position that we will be able to recommend a change in the measures [that] are in place at that time,” Dr Holohan said.