Bank is latest lender to beat estimates in the quarter 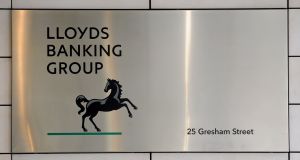 Lloyds said it was starting to see an encouraging recovery after it took serious hits from the Covid-19 pandemic. Photograph: Nick Ansell/PA Wire

Lloyds Banking Group Plc swung to a profit of more than £1 billion in its third quarter, helped by a buoyant UK housing market and the lower-than-expected impact of the Covid-19 pandemic on borrowers in recent months.

Britain’s biggest mortgage lender reported statutory pretax profit that was almost double the £588 million analysts expected as demand for home loans surged. The bank set aside £301 million for debts that were unlikely to be repaid, saying this was “broadly in line with pre-crisis levels.”

Lloyds, which said impairments for the year should be at the lower end of its forecast of between £4.5 billion and £5.5 billion, is the latest lender to beat estimates in the quarter thanks to lower provisions.

The upbeat results come despite a backdrop of rising coronavirus infections and tougher lockdowns, adding to investor worries about the economic hit from the pandemic.

“The outlook remains highly uncertain given the second wave of coronavirus, government response including social distancing measures and the end of the furlough scheme, together with the ongoing Brexit negotiations,” chief executive Antonio Horta-Osorio said in a statement on Thursday.

Mr Horta-Osorio said on a media call that the British economy was decelerating. Some of the UK government’s support, such as the furlough programme paying wages for 9 million workers, is set to end this week even as lockdown measures are revived.

Lenders like HSBC and Barclays have already signalled this quarter they plan to resume payouts pending regulatory approval. Any resumption of dividends would be considered by the board at the end of the year, Lloyds chief financial officer William Chalmers said on a call Thursday with journalists.

The bank’s CET1 ratio, a key measure of capital strength, rose to 15.2 per cent, up 0.6 percentage points from the end of June.

“Despite the economic uncertainty, we view these as a good set of results with the strong capital base meaning the group is well positioned to withstand any further economic shock while potentially also resuming distributions to shareholders,” said Gary Greenwood, analyst at Shore Capital.

The bank is searching for its next CEO after Mr Horta-Osorio announced his resignation in July. Robin Budenberg, newly elected chairman, joined the board in October and will take over from Norman Blackwell in January, Lloyds said Thursday.

During his 10-year tenure, the Portuguese CEO cut thousands of jobs and transformed the bank into one of the most efficient lenders in Europe. The bank has recently restarted the job cuts it paused during the pandemic. - Bloomberg