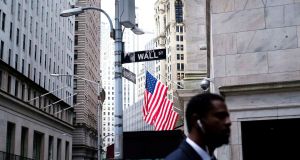 Apple, Amazon.com and Google’s parent Alphabet rose between 1.5% and 3.4% ahead of their results. File photograph: EPA

European stocks ended the day slightly weaker, hitting session lows after the European Central Bank (ECB) gave a strong indication that it will boost its emergency bond-buying in December to stabilise the euro zone economy, but made no immediate announcement.

This followed a sharp sell-off in the previous session when Germany and France imposed nationwide restrictions to deal with a second wave of the Covid-19 crisis.

The Iseq outperformed the major European indices, finishing with a 3.1 per cent gain – its best day since May.

Glanbia surged 8.9 per cent to €8.38 after it reported an increase in third-quarter revenue despite struggles for its performance nutrition business. The food group also said it was witnessing “improving trends” notwithstanding the pandemic’s challenges.

The market was also pulled upwards by Flutter Entertainment, the owner of Paddy Power, which advanced 8.3 per cent to €146.40 on the possibility of entering the elite Euro Stoxx 50 blue-chip index. Flutter was also one of the biggest movers on the London market.

Many of the stocks that sustained falls on Wednesday recovered ground, with AIB soaring 8.7 per cent to just under 99 cent and Bank of Ireland finishing with a 4 per cent gain at €2.06.

The FTSE 100 index closed marginally down, while the mid-cap FTSE 250 was 0.4 per cent lower, on a day when sell-offs were paused but trading still subdued.

But there were plenty of fallers, among them Aer Lingus owner International Consolidated Airlines Group (IAG), which dropped 2.8 per cent.

Telecoms group BT increased the lower end of its earnings target for the year despite reporting an 8 per cent decline in revenues over the past six months, but investors sent the stock 2.5 per cent lower.

Outsourcing giant G4S slipped 0.2 per cent after it reiterated opposition to an attempted hostile takeover by Canadian rival GardaWorld.

The pan-European Stoxx 600 index nudged down 0.1 per cent, having fallen up to 1 per cent after the ECB resisted pressure to unveil more stimulus, but provided the clearest hint yet of fresh easing at its next meeting in December.

Rebounding from five-month lows, the German DAX advanced 0.3 per cent, supported by the communications and technology sector.

Spain’s Ibex underperformed, closing down 1 per cent at a seven-month low. Bank of Spain called for a more bold response from the EU to help firms and households weather the Covid-19 crisis.

Apple, Amazon. com and Google’s parent Alphabet, which have seen a surge in demand for their products and services from people staying at home, rose between 1.5 per cent and 3.4 per cent ahead of their results.

Facebook and Twitter, which were also due to report, jumped about 5 per cent and 7 per cent respectively as Pinterest forecast a rebound in ad spending. Shares of the image-sharing company soared more than 28 per cent. – Additional reporting: Reuters