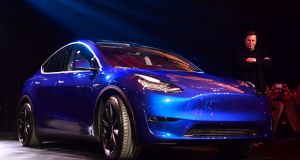 Tesla’s Elon Musk told employees the electric-car maker is having issues boosting output of its new Model Y crossover and said he’ll be walking the assembly line on a weekly basis to troubleshoot production snafus.

“We are doing reasonably well with S, X and 3, but there are production and supply chain ramp challenges with Model Y, as is always the case for new products,” Musk wrote in an internal email sent Saturday.

Musk has predicted the Model Y will eventually surpass the Model 3 saloon as Tesla’s top-volume vehicle and could outsell all current cars in the lineup combined. Tesla shares rose 7.3 per cent on Monday to close at $949.92 (€838), a record high.

Tesla shares are at an all-time high. But no stock in the automotive sector is a better indication of equity-market exuberance than Nikola Corp. The aspiring battery-electric and hydrogen fuel-cell truck maker debuted on the Nasdaq last week following a reverse merger with a blank-check company headed by a former General Motors Co. executive and board director. It’s forecasting zero revenue for 2020 and its first $1 billion year won’t be until 2023. – Bloomberg