Volkwagen CEO apologises to supervisory board for ‘inappropriate’ remarks 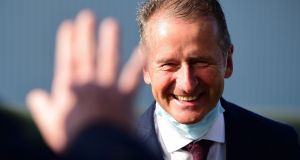 Volkswagen chief executive Herbert Diess apologised to the company’s supervisory board for having made “inappropriate and wrong” statements at an internal event, the carmaker said on Tuesday.

The public acknowledgment that Mr Diess had been forced to apologise to the 19-member board of directors amounts to a severe admonishment of Mr Diess, who had his portfolio of responsiblities curtailed on Monday. “The members of the Supervisory Board accepted the apology of Dr. Diess, and will continue to support him in his work,” the statement added.

Mr Diess remains chief executive of a group which also includes brands such as Audi, Bentley, Skoda, Lamborghini and Porsche.

Mr Diess clashed with key stakeholders over the direction and leadership of the world’s biggest carmaker, accusing supervisory board members of committing crimes by leaking confidential discussions, according to sources familiar with the matter. The allegations raised tensions among Volkswagen’s power players and caused the chief executive to be stripped of key responsibilities.

During a recent internal webcast, Mr Diess told more than 3,000 managers that the issue could cause problems with US authorities, which are monitoring the company as part of the settlement from the 2015 diesel-cheating scandal.

Volkswagen declined to comment. Board members, roused by the scolding and already unhappy with production issues plaguing key models, discussed removing Diess as group chief executive, sources said. At an extraordinary board meeting on Monday, they instead stripped him of his direct control over the namesake VW brand, a high-profile position at the centre of the auto giant’s operations.

The infighting comes at a critical time for Volkswagen. The German carmaker is trying to soften the impact of the fallout from coronavirus, while also managing a major shift toward electric vehicles. – Reuters/Bloomberg