Car review: Golf is bowing out as VW’s star car. So is the new version any good?

Even as its all-electric ID.3 arrives, Volkswagen insists its workhorse has life in it yet 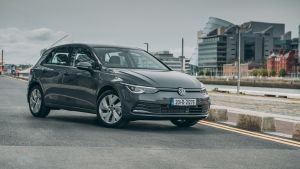 The new Golf is longer, wider and taller than before, which means a spacious cabin, but takes away a little from its sportier lines.

What we’re witnessing here is not just another VW Golf, but a momentous moment in motoring history. It’s the changing of the guard. For nearly five decades, this German family hatchback has been the bedrock of the brand. Think Volkswagen: think Golf.

Now, in this new electric age VW has opted for a new star car, the all-electric ID.3, coming our way later this year.

So does this new Golf not really matter any more? Is this its swansong?

The end of Golf’s reign was already on the cards when it lost its place as VW’s best-selling model, first to Polo in 2018 and then to the new Tiguan.

Yet with 35 million sales since it hit the road in 1974, there’s unlikely to be a stretch of tarmac in the western world that hasn’t had a Golf on it. And there are folks who couldn’t tell a Rolls Royce from a Reliant Robin yet can still identify a VW Golf from 100 metres away.

The successor to the Beetle, in many ways the Golf became the people’s car that Volkswagen aspired to in its name. It’s the ultimate classless, genderless, ageless hatchback, at home on the gravel drive of a country estate or the car park of a council flat. It doesn’t define its driver, except to suggest they’re eminently sensible in their motoring choice.

It has been ridiculed for being a bit dull at times, sticking to its signature silhouette through its now eight generations. Yet that styling touch has been key to its success. It lets the older models age more gracefully, so the student with the well-maintained 12-year-old Golf doesn’t seem all that different from the stockbroker in the brand new GTi.

But this road test is not meant to be a eulogy as VW says the Golf is going nowhere and will sit alongside the ID.3 on forecourts for years to come.

However, there’s no question that Golf’s role at VW has changed. It’s no longer the headline act, a model project driven by engineers. Now it’s about profit, with the bean counters playing as big a role in its future as the engineers.

Despite claims by car company bosses that their new electric models are profitable projects, many have their doubts. In an interview last week, Sir James Dyson explained why his recent attempt to create a new electric car brand ended in defeat. “The nub of the problem is that big car makers are now using their electric models to prop up their gas guzzlers. That makes EVs unrealistically cheap.”

While you wouldn’t put the Golf in the “gas guzzler” category, his point is valid that these manufacturers are using their new electric models to meet tough new average CO2 limits, which in turn lets them carry on selling profitable conventional cars.

It seems entirely plausible. Apply it to VW and that means the Golf – and other volume models – must bring in the cash to cover electric car development costs.

So what to make of this particular cash cow? Well, it’s unmistakably a Golf. Yet there seems to have been a softening of its lines, particularly up front.

The grille has slipped too far down the bonnet for my liking. And that easily identifiable Golf silhouette is starting to look a little generic, copied so much by Korean rivals that it’s lost a little of its trademark lines.

Part of that may be down to the fact the new car is longer, wider and taller than before, which means a spacious cabin, but takes away a little from its sportier lines.

It’s inside where Golf aficionados are in for the biggest surprise. VW has truly embraced the digital age. It’s a radical departure from the past and one that not everyone is going to love.

Even at entry grade the driver gets a digital binnacle display, but step up to mid-range Style trim and you also get the new 10-inch touchscreen in the centre console. Aside from climate control and a volume slider, laid out before the driver is a wall of black plastic screens, a steering wheel and, if you opt for manual transmission, to the left a gear stick (opt for automatic transmission and even this becomes merely a stump).

The two screens create a smart multi-screen dashboard, the software is intuitive, yet in opting for its new digital dash, the Golf has lost a little of its trademark characteristics. The dualscreen design is very similar to the Mercedes-Benz A-Class format, for example, for good and for ill.

Just a note on the volume slider. Previously VW put the volume control on the touchscreen but it was very imprecise. The new slider is meant to remedy this, but it’s still hit and miss. While engineers clearly want car controls to mimic smartphones, sometimes a button is still best. Those working on the future facelift version, please take note.

Underpinning the new Golf is VW’s award-winning MQB platform, taken from the outgoing version but updated to offer better rigidity. While that might suggest more cost savings, it’s a great place to start, with the seventh generation receiving numerous plaudits and awards for its handling prowess.

The rival Ford Focus has always been something of a benchmark when it comes to delivering engaging hatchback driving fun, closely followed by Mazda with its 3. This Golf, however, is direct, agile and remarkably well-balanced.

It’s an easy, comfortable drive and that’s all the attributes it needs to win over most hatchback buyers.

And the engine line-up now boasts three new mild hybrids, supported by a 48-volt electric system. However, our test car was powered by the non-hybrid 1.5-litre 130bhp petrol engine, and was the better for it. This four-pot is not the most potent in the powertrain line-up but it’s a lovely smooth engine that’s well-suited to the car and for everyday Irish motoring needs.

Diesel remains an option for Golf buyers, with a 2-litre 115bhp engine, while entry level comes with the company’s impressive little 1-litre 90bhp petrol unit. Opt for this entry-level model and you not only sacrifice power but also dynamic ability, as the rear suspension changes from an independent multilink system to a basic twist-beam set-up.

That’s perhaps yet another sign of the VW bean counters at work on their budgets.

Of course budgets will also decide the buyer’s choice. The Golf price list may start at €23,950 for the 1-litre petrol in standard grade, but if you want to add a few extras or opt for another engine you’ll get little if any change from €30,000.

There are better-priced rivals, more meaningful hybrid variants and more striking-looking hatchbacks. Big name rivals include the Ford Focus, Toyota Corolla or Kia Ceed, and even in the premium market the new BMW 1 Series is now a good buy.

But there’s always going to be a loyal following for the Golf and this latest offering, with its digital displays, offers enough to keep the conventional competition at bay while VW prepares for what it hopes will be the new era of the ID.3.

There is an allure to the Golf, built largely on legacy, so when it comes to  parting with your hard-earned cash this  VW always seems a sensible choice. Five decades on, you won’t go wrong opting for another Golf.