Tesla exploring local manufacturing in China to reduce its cost base 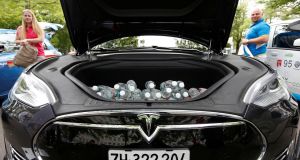 Tesla Inc said it’s working with the Shanghai government to explore local manufacturing in China, a move that would allow the electric-car maker to achieve economies of scale and bring down manufacturing, labour and shipping costs.

The electric-car maker led by Elon Musk expects to more clearly define production plans by the end of the year, according to an emailed statement.

While most of its production is expected to remain in the US, the Palo Alto, California-based company said it needed to establish local factories “to ensure affordability for the markets they serve”.

Reaching a deal to produce cars in China would help Tesla better compete with local rivals because it would eliminate a 25 per cent import tariff that makes Tesla’s Model S sedans and Model X sport utility vehicles more costly than in US showrooms.

The company is scheduled to begin production in July of the Model 3, the cheapest model in its line-up so far, from its lone assembly plant in California.

“The entrance of Tesla into local production is a necessary step for Tesla to gain relevance in the world’s largest EV market,” said Bill Russo, managing director of Gao Feng Advisory Co and a former head of Fiat Chrysler Automobiles NV’s Chrysler unit in China.

Tesla shares rose 1.2 per cent in early trading in New York and are up 78 per cent this year. The company’s statement did not specify which Tesla products are being considered for local manufacturing in China.

China has identified new-energy vehicles as a strategic emerging industry and aims to boost annual sales of plug-in hybrids and fully electric cars 10-fold in the next decade. A total of 507,000 new-energy vehicles including electric cars were sold last year in the country, according to the China Association of Automobile Manufacturers. About 15 per cent of Tesla’s $7 billion in revenue last year was generated in China, according to data compiled by Bloomberg.

1 Son putting elderly dad under pressure to sign over land
2 How to gift your child a house deposit . . . tax free
3 BOI customers to be charged twice with bank fees on New Year’s Eve
4 Family in court dispute over hotels in Dublin and Galway
5 Stripe in talks for new funding at much higher valuation
6 Ryanair warns it may reduce more Irish services and relocate operations
7 City of London makes late scramble to limit Brexit disruption
8 Irish designer of Oxford vaccine: ‘I’ve never worked so hard in my life’
9 CRH eyes return to acquisitions and mergers in 2021
10 Workers have little idea of the cost of retirement income
Real news has value SUBSCRIBE