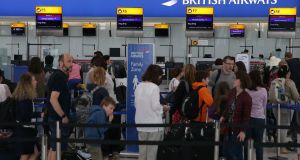 Thousands of passengers departing from Heathrow Airport have had to fly without checked luggage due to a system failure.

The airport advised travellers departing from Terminal 3 and Terminal 5 to pack essential items in their hand luggage.

It came less than three weeks after chaotic scenes at the airport when British Airways grounded all flights following an IT power cut.

Heathrow posted a message on Twitter at 6.45am on Thursday to alert passengers. An updated statement was issued at 9.07am to report that bag drop desks had reopened.

A number of passengers went on social media to express their anger at the latest disruption. Zoe Morrison wrote on Twitter: “British Airways let us down again Heathrow Airport – no baggage being loaded this morning and no information for passengers.”

Ryan Wooldridge said: “Baggage failure at Heathrow Airport this morning. Bags won’t be making it on to flights, absolute shambles.”

Rachel Jackson tweeted: “Just found out that despite checking in 3 hours early bag not on flight, disgusted, what are you doing about it Heathrow Airport?”

Heathrow’s initial statement read: “Heathrow is currently experiencing an issue with its baggage systems which is affecting airlines operating from Terminal 3 and Terminal 5. Other terminals are unaffected.

“This may mean passengers will travel without their bags, and we advise them to pack essential items in their hand luggage. We are currently investigating the issue. We are sorry for the disruption, and are working hard to get the system running as soon as possible.”

A spokesman for BA said: “We’re currently unable to accept bags, and strongly encourage customers to pack essentials in their hand baggage. Heathrow Airport is working hard to fix the faults.

“We’re sorry for the disruption that customers are facing, and more information is available on BA.com.” – PA