The new Luas Cross City line is tested for the first time on Saturday, June 17th as work on the line enters its final six months. 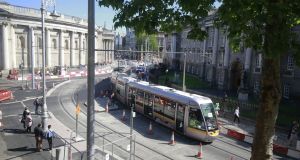 A Luas tram run through College Green on Saturday as testing begins on the new cross city Luas line which is due to fully open in December. Photograph: Nick Bradshaw 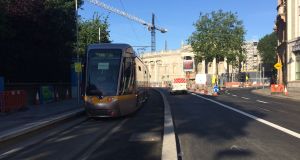 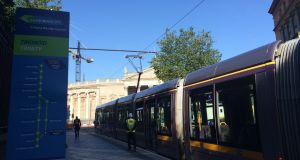 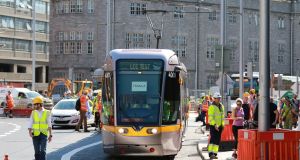 The new Luas Cross City line is being tested for the first time on Saturday as work on the line enters its final six months.

Traffic restrictions will be in place around the College Green and O’Connell Street areas on Saturday as the tram is moved at a slow pace of 5-10km per hour.

The tram traveled from St Stephen’s Green to the O’Connell Street stop (opposite the Gresham Hotel) at 11.30am.

Speaking at the end of the test run Minister for Transport Shane Ross said the Luas cross city project was “a fantastic achievement”.

“I’ve only been Minister for one year and it’s certainly one of the most successful things that’s happened.

“We’ve had several meetings with stakeholders, particularly retailers, and they are absolutely thrilled that this is going to happen. This was planned a long time before I was Minister, but I imagine it was geared to open for the Christmas market” Mr Ross said.

“I think there will be difficulty in the interim period, and when they are doing the testing. But I think once it gets going in December it’ll be fantastic” he said.

Dublin City Council chief executive Owen Keegan also attended test on O’Connell Street. “It’s tremendous that we’re on the last lap. In fairness is has been disruptive. I have no doubt it’ll transform the city. It’ll make it a much more pedestrian-friendly public city” he said.

Michael Nolan chief executive of Transport Infrastructure Ireland (TII) explained that “over the coming months testing will continue. Alongside the finishing of paving, footpaths and carriageway reconstruction work.

“From mid-September the training of drivers will start and passengers services are due to commence in December.”

The trams were brought from the Red Line onto the new Cross City tracks early on Saturday morning for test and the trams will stop at all new platforms along the 5.9km route as far as Broombridge in Phibsborough by Sunday.

Two trams were seen moving outside Trinity College Dublin at 7am.

A gauge run consists of running the trams at a slow speed while an engineering team makes sure that tracks and overhead lines are working correctly.

The new line will connect the two existing Red and Green lines between Stephen’s Green and O’Connell Street before continuing onwards to Broombridge.