Cantillon: estimates of compensation likely to be due to customers run to £150m 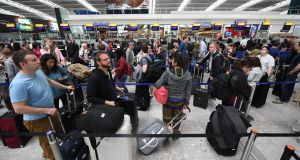 British Airways (BA) is one of the world’s best-known airlines, but its image for quality and service took a hammering at the weekend when it was forced to ground almost 600 flights following a technology failure.

An as yet undetermined number of Irish people were hit alongside hundreds of thousands who were left hanging around Heathrow, Gatwick and other airports over the weekend.

Estimates of the compensation likely to be due to those customers run to £150 million (€172.5m), leaving the carrier with a financial headache as well as a battered reputation.

Very quickly critics trained their sights on chief executive Alex Cruz, the former head of BA’s sister International Airlines’ Group (IAG) carrier Vueling, who took the helm at the British company a little over a year ago and has since presided over a tough cost-cutting programme.

However, it is a little early to be apportioning blame to anyone. According to Cruz, the cause was a power surge that hit messaging across BA’s IT systems. The problem occurred at a local data centre so it is hard to see how he could have any control over that.

A lot of the anger is at how the airline handled the situation as it unfolded on Saturday. He may yet have to shoulder some blame for that, but with its systems down it might well be that there were difficulties in communicating with frontline staff and with customers themselves.

A lot of commentators are blaming his cuts, particularly lay-offs, which they say saw experienced staff leave and the outsourcing of IT to India, for the weekend’s problem. In an interview with the BBC, Cruz stressed that those factors were not responsible “in this instance”.

Presumably BA, its board and parent IAG are going to carry out a fairly detailed postmortem of the whole affair. Whether or not heads roll, the airline has a job on its hands to undo the damage to its image.

The situation was not without its ironies either. Lots of pro-Brexit media in Britain carefully outlined details of the compensation to which passengers were entitled following the cancellations under EU rules. Some even pointed out that those regulations were brought in by their favourite pantomime villains in Brussels.