Eight British Airways flights from Dublin cancelled over IT failure 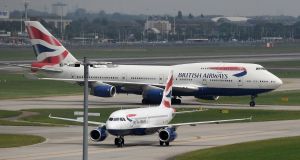 British Airways aircraft at Heathrow Airport in London on Monday. An IT systems failure forced BA to scrap almost 600 flights in and out of Heathrow and Gatwick airports. Photograph: Andy Rain/EPA

British Airways (BA) cancelled eight flights from Ireland’s biggest airport as a result of the IT failure that forced it to ground hundreds of services over the weekend.

An IT systems failure forced BA to scrap almost 600 flights in and out of Heathrow and Gatwick airports in London, leaving passengers stranded in the British capital and around the world.

BA had to cancel a total of eight flights from Dublin to Heathrow between Saturday, Sunday and Monday as a result. It grounded five services on Saturday, when the problem struck, two on Sunday and one on Monday.

The airline was unable to say how many Irish passengers were left without flights. Aer Lingus, part of International Airlines’ Group along with BA, was able to take some passengers stranded by its sister carrier.

The Irish airline is aware of only a small number of its customers that suffered as a result of the technology failure. Its systems and flight schedules operated normally with no disruption over the weekend.

“Our team offered assistance to guests who were due to transfer onto BA services at London Heathrow by re-booking them on to Aer Lingus flights where possible,” the Irish carrier said in a statement.

Aer Lingus and BA regularly transfer passengers between each other’s networks. Many of the Irish airline’s customers switch to long-haul services offered by BA from Heathrow.

Sources pointed out that a number of those planning to travel with BA over the weekend from this country may not have shown up for flights once they heard of the mass cancellations.

They may have changed plans or arranged their own alternatives. The full number is likely to be known only when those passengers seek the compensation to which they are entitled.

Some reports suggested BA could be facing up to £150 million in claims from customers whose flights were cancelled. In situations such as this, European Union laws oblige airlines to either provide alternative services or compensate passengers.

BA got its system back up on Sunday and began restoring services at both airports, but with some delays and cancellations. It operated all flights from Gatwick, with some hold-ups.

At Heathrow, the airline restored long-haul services on Sunday but had to cancel some short-haul flights. The British carrier continued to work on restoring schedules to normal on Monday.

BA chief executive Alex Cruz blamed the IT failure on a power surge on Saturday morning that affected messaging across the airline’s systems. He said there was no evidence of a cyber attack and denied a trade union claim that outsourcing technology work to India played a part in the problem.

Critics in the British media and elsewhere focused on Mr Cruz, who has cut costs at BA since he took over in April 2016. He said that he did not intend to resign.