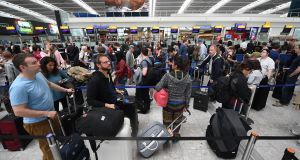 When British Airways chief executive Alex Cruz finally raised his head above the parapet on Saturday, it was a full eight hours after the airline’s IT system had gone into meltdown on one of the busiest holiday weekends of the year.

The chaotic scenes at Heathrow and Gatwick had been playing on news channels and social media all day, yet it was not until 6.30pm that Cruz stepped up to address passengers via a two-minute video released on Twitter.

Speaking from inside BA’s Heathrow operations centre, but for some reason wearing a yellow high-vis jacket, he certainly looked prepared to take some flak, even if he wasn’t taking any questions.

However, the ferocity of the outpouring of anger against Britain’s flagship carrier is still likely to have shocked the Spanish-born BA boss.

It was a full 48 hours before he faced the media, and then only in interviews with broadcasters rather than newspapers. By the end of the long bank holiday weekend, Cruz was forced to insist that he would not be resigning.

BA has been widely criticised for not addressing the meltdown as soon as the scale of it became apparent on Saturday morning. Cruz was further accused of “gagging” staff by sending an email instructing them not to engage in “live commentary” on the crisis.

Some BA employees appear to have taken this a little too literally, with increasingly frustrated and confused passengers complaining of a complete lack of information and support from the airline.

The computers were back up on Tuesday, and full flight schedules restored, but this is not the end of the crisis for BA. Its communications procedure has been exposed as woefully inadequate and its rather vague explanation that the meltdown was caused by a “power surge” is increasingly being called into question.

Whatever the reason for the outage, surely back-up systems should have kicked in?

There was anger, too, that the group appeared to be profiting from the debacle, as it offered desperate passengers a premium rate number to call – at a cost of up to 62p a minute. Some passengers placed scores of calls, only to receive little or no useful information.

Thousands have yet to be reunited with their luggage and the airline has warned it could be several days before all bags are returned.

For some BA customers, this may be the last straw. There were fears about customer service when Cruz was appointed to the top job at BA job a year ago, from IAG’s Spanish low-cost carrier Vueling.

He swiftly demonstrated his cost-cutting credentials, axing hundreds of jobs as IT operations were outsourced to India.

He insisted at the weekend that the systems failure was totally unconnected to the outsourcing move, although the unions claimed otherwise.

Earlier this year BA scrapped free food and drink on short-haul flights for economy passengers, who now have to pay for M&S salads or sandwiches, as well as for tea and coffee.

Cruz, who clearly believes passengers value low-ticket prices above all else, has indicated the airline may go the same way on long haul journeys.

It’s true that ticket prices are usually the key factor when booking flights, but BA – “the world’s favourite airline” – had prided itself on being a cut above the competition in terms of service, and some passengers were prepared to pay for that.

When trading opened on Tuesday after the holiday weekend, shares in IAG initially fell almost 5 per cent, wiping more than £500 million from its stock market value.

However, by the end of the day, they were just 1.4 per cent lower, an extraordinarily resilient performance given the saturation coverage of the crisis over the past three days.

There will be a financial hit to BA as it compensates its customers – up to £150 million is the latest estimate – but that’s a relatively small figure for a company of IAG’s size.

The reputational cost is harder to calculate, but the City clearly thinks that will be manageable, too.

Nonetheless, Cruz should probably keep his high-vis jacket handy in the weeks ahead, in case any further fall-out requires a head to roll. The conspicuous absence of his boss for the duration of the crisis would appear to indicate that Walsh has no intention of taking the fall for this one.