Plans for Dublin runway could be about to enter holding pattern 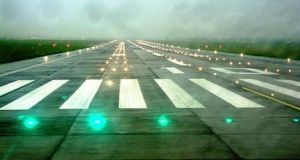 DAA wants lifting of the limits on the number of flights in and out of Dublin Airport between 11pm and 7am, and to ease other restrictions imposed in 2007

Plans for Dublin Airport’s new €320 million runway could be about to enter a holding pattern as legal challenges to the proposal are beginning to queue up in the Four Courts.

On Monday, Mr Justice Brian McGovern agreed to fast-track a third case, this one brought by Friends of the Irish Environment against the planning authority, Fingal County Council and the State, to October 3rd.

It will be heard alongside two others brought by locals from north Co Dublin, sparked by the council’s decision to extend planning permission for the development, which was originally granted in 2007. The airport’s operator, State company DAA, sought the extension as the permission was due to expire in August.

There is no great surprise about this. Local opposition dates back to when permission was originally given, while the environmentalists had voiced their fears about the runway’s impact on habitats and greenhouse gas emissions.

Alongside this, DAA wants the permission altered to lift limits on the number of flights in and out of Dublin Airport between 11pm and 7am, and to ease other restrictions imposed in 2007.

Part of its case will be that it complies with new EU rules governing aircraft noise at airports. The directive on which this is based says that flight numbers should only be restricted after considering land use, noise abatement and the use of less noisy aircraft. DAA says that it meets all these requirements. However, legislation bringing this into force is unlikely to be passed for a year, so a central part of the airport company’s case for changing the original planning conditions cannot be considered until then.

That would be further complicated if the courts were to uphold any or all of the three challenges due to be heard in October. A decision in locals’ or environmentalists’ favour would throw a question mark over the planning permission itself, let alone the conditions that DAA wants changed, potentially setting the entire project back. Looks like the State company should be fastening its seatbelts as there may be turbulence ahead.