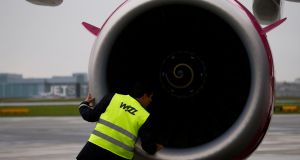 A Wizz Air worker checks an engine of an Airbus 321 in Warsaw. Photograph: REUTERS/Kacper Pempel

Wizz Air Holdings reported a 28 per cent rise in full-year profit on Thursday and said it had seen no signs of demand for flights weakening since Britain voted to leave the EU, helping to send its shares to a record high.

Shares in the London-listed airline that focuses on flights to central and eastern Europe jumped as much as 11 per cent to a high of 2,166 pence, with analysts also saying its profit forecast for the current financial year was above consensus.

Wizz Air said its profit for the 12 months to the end of March rose to a record €246 million from €193 million a year earlier while revenue climbed 10 per cent to €1.57 billion.