Carmaker due to release Taycan next year 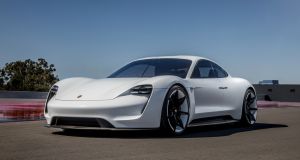 The Porsche Taycan is due to be released next year.

Porsche’s all-electric Taycan model, due next year, will let drivers travel about 400 kilometres after charging the vehicle for less than 20 minutes, the company’s chief Executive said in an interview.

Oliver Blume, speaking to German newspaper Welt am Sonntag, noted a new 800 volt electricity supply system will power a car for about 100 kilometres after a four-minute charge. The next generation of battery technology, available in about a decade, will again double the reach to about 1,000 kilometres and cut the time for charging, he added.

The company has joined with BMW, Daimler, Ford and Audi to develop infrastructure to allow fast charging of electrically powered vehicles across Europe, he said.

Porsche faces pressure from Tesla and government initiatives to eventually phase out combustion engines in favour of electric cars, and Mr Blume said he has the “highest respect” for Tesla’s chief executive Elon Musk for creating a new segment within the industry.

While the company expects about half its newly sold vehicles to be hybrid or electric by 2025, it will continue to offer its 911 model with a combustion engine “for as long as possible.”

The next 911 will include a conventional engine, but designed to eventually house a hybrid power plant, Mr Blume said. – Bloomberg