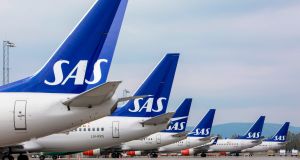 About 80 crew working for airline SAS Ireland in Spain face the loss of their jobs..

SAS Ireland is a subsidiary of the Nordic state airline that is registered in the Republic but which flies between different destinations in Europe.

CAE Crewing Services, the Dublin-based agency that provides pilots and crew for the airline, told 80 workers based at Malaga Airport in Spain that it was beginning the process of collective redundancy.

“We can confirm that our crew are permanent employees, employed in full compliance with Spanish employment law and have full employment protection status that all other employees have,” CAE said.

The European Cockpit Association, which represents pilots’ unions around the continent, highlighted SAS Ireland’s move to lay off workers in a statement.

The association warned that thousands of pilots and crew working for agencies or treated as self-employed had lost their jobs in recent weeks as a result of the Covid-19 crisis.