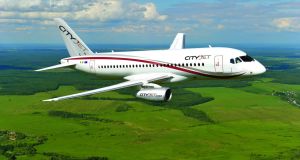 The High Court has confirmed the appointment of an examiner to the regional airline CityJet.

Mr Justice Michael Quinn said on Monday he was satisfied to appoint insolvency practitioner Kieran Wallace of KPMG as examiner to CityJet DAC.

The decision gives Mr Wallace, who earlier this month was appointed on an interim basis, up to 100 days to formulate a scheme of arrangement with the airline’s creditors which must then be approved by the court.

The airline and its subsidiaries, which flies routes on behalf of other airlines including SAS and Aer Lingus, and employs 1,175 people, 417 of whom are based in Dublin, believes it can continue.

There were no objections to the airline being granted the protection of the court from its creditors. Rossa Fanning SC, for CityJet, said some creditors were supporting the application.

The airline said it became insolvent arising out of financial difficulties which were exacerbated after its fleet of over 30 aircraft was grounded due to the Covid-19 outbreak.

The impact of the virus interrupted a planned merger with another airline and a proposed private restructuring of the company, it said.

James O’Doherty SC, for Mr Wallace, said, in the short time his client has been involved with the airline, there has been at least one expression of interest from a potential investor.

Mr Justice Quinn said he was confirming the examiner’s appointment on grounds including an independent expert’s report had stated the company has a reasonable prospect of survival if certain steps were taken.

The judge said the number of people employed in the company was a relevant factor. He noted, during its history, the company has overcome several challenges it has been presented with.

While there was a lot of uncertainty as to exactly when air travel can resume, he noted the support CityJet had received from its main customer SAS.

SAS, on whose behalf CityJet operates several regional services, hopes there will be a gradual return to flying in June or July.

While there were no objections to the application to confirm the examiner’s appointment, the judge said he was satisfied to make orders sought by Revenue Commissioners, including to be made a notice party.

Revenue had raised concerns about the examinership application, and the court heard the company was answering Revenue’s questions.

Those assessments, which CityJet says it does not have to pay, have been appealed to the Tax Appeals Commission by the airline.

The airline no longer flies scheduled routes itself, and has moved to a model known in the aviation industry known as wet leasing where it provides serviced aircraft and crews to operate routes for other carriers.

In each of the last three years the airline had revenues of over €220 million. It made a profit in 2017, but suffered significant losses in 2018 and 2019 due to various factors.

It has debts of €500 million and currently has a net deficit of liabilities over assets on a going concern basis of €186 million.

Its creditors include the Triangle Group, firms involved in the leasing of aircraft, Investec, the Revenue, as well as debts owed to related companies.

In order to counter its difficulties, plans had been put in place with its creditors to restructure the business and merge with Spanish airline Air Nostrum.