Ryanair to ground most flights by next week

Airline said most, if not all, of its schedule will be cut by Tuesday, March 24th 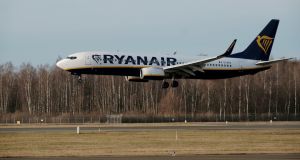 Ryanair will ground most, if not all, of its flights by next Tuesday, it said, adding that between now and then its flight schedules will be cut by over 80 per cent.

The budget airline issued a statement at lunchtime on Wednesday, noting that all but a “very small number of flights to maintain essential connectivity, mostly between the UK and Ireland”, would be cancelled from midnight on Tuesday March 24th.

Between midnight on Wednesday and next Tuesday, the company will cut flight schedules by “over 80 per cent”. “All affected customers will receive an email to advise them of their options and we kindly ask customers not to call us as our call centres are overloaded dealing with customer queries.”

Ryanair’s announcement follows the rapid spread of the Covid-19 virus which, it notes, has led most EU governments to impose severe restrictions on travel.

“Ryanair will continue to stay in close contact with the Foreign Ministries of all EU Governments on the repatriation of EU citizens, and where possible we may operate rescue flights to support this repatriation,” it said.

The budget airline, led by Michael O’Leary, said it “sincerely regrets all disruptions caused” by the crisis.

“The safety and well-being of our people and customers is our main priority,” it said.

On Monday, said it was taking “immediate action” to reduce operating expenses, and improve cash flows.

“This will involve grounding surplus aircraft, deferring all capex and share buybacks, freezing recruitment and discretionary spending, and implementing a series of voluntary leave options, temporarily suspending employment contracts, and significant reductions to working hours and payments,” it said.

Over the weekend for example, Poland and Norway banned all international flights, while in other countries, without travel bans, there has been severe reduction of air traffic controllers (ATCs) and essential airport services.

“Ryanair is a resilient airline group, with a very strong balance sheet, and substantial cash liquidity,” he said.