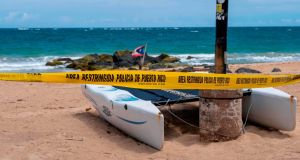 Police tape restricts access to the beach in the tourist area of El Condado in San Juan, Puerto Rico, as part of efforts to halt the spread of coronavirus. Photograph: Ricardo ArduengoAFP via Getty Images

Johns Hopkins University said on Wednesday that the total number of confirmed cases of coronavirus worldwide has passed 200,000. The Johns Hopkins Centre for Systems Science and Engineering’s online tally showed 201,436 cases, with 8,006 deaths, and 82,032 patients listed as recovered.

Cases and deaths outside China are overtaking those in the country where the coronavirus outbreak began, according to a Reuters tally. Infections outside China have been reported by 164 countries.

Mainland China had 13 new confirmed cases of the novel coronavirus, also know as Covid-19, on Tuesday, down from 21 a day earlier. Of the new cases, 12 involved infected travellers arriving from abroad. That brings the total number of confirmed cases in mainland China so far to 80,894.

The death toll in mainland China from the outbreak had reached 3,237 as of the end of Tuesday, up by 11 from the previous day.

China has authorised clinical trials on its first vaccine developed to combat the coronavirus.

The mayor of the worst-hit South Korean city said 87 new cases have been discovered from local nursing hospitals, raising concerns about a possible spike in infections after they had waned over the past week. Daegu mayor Kwon Young-jin said 74 of the cases came from a single hospital and that the 57 patients who were infected would be transferred to other facilities for treatment. The country’s total infections stand at 8,320, the death toll is 81.

Taiwan will ban entry to the island for most foreigners, excluding foreign resident permit-holders and diplomats.

P akistan on Wednesday confirmed its first two deaths from coronavirus as the total number of infected patients in the country climbed to 260, its health minister said on Twitter.Also in Wednesday, Sri Lanka sealed itself off and shut its stock market.

The total number of confirmed coronavirus cases in the Indian subcontinent had risen overnight to 482 as authorities across the region imposed travel restrictions to block the fast-spreading disease.

A dispute is growing in Pakistan between federal and provincial authorities, with the latter struggling to secure sufficient coronavirus testing kits and blaming the federal government for failing to properly test and quarantine hundreds of Pakistanis who recently returned home across a land border with Iran.

Sri Lanka, which has recorded 43 coronavirus cases, said it would ban all incoming flights for two weeks from Wednesday. Officials also implemented price controls on lentils and sardines to prevent price gouging.

In India, where 147 cases of the coronavirus have been confirmed, authorities on Tuesday cancelled nearly two dozen long-distance train services.

Desperate travellers in cars and trucks were choking European borders on Wednesday, creating traffic jams up to 17 miles long as they try to get home before borders shut or to deliver critical supplies to help nations cope with the coronavirus.

The death toll in Italy has surged in the last 24 hours by 475 to 2,978, an increase of 19 per cent, the biggest jump in numerical terms since the contagion came to light in the country last month, Italian officials said on Wednesday.

The total number of cases in Italy, the European country hardest hit by the virus, rose to 35,713 from a previous 31,506, up 13.35 per cent, the Civil Protection Agency said. Of those originally infected, 4,025 had fully recovered, compared with 2,941 the day before. Some 2,257 people were in intensive care against a previous figure of 2,060.

Italy’s prime minister said the coronavirus was causing a “socio-economic tsunami” as European leaders agreed to seal off external borders.

France put its 67 million people under lockdown on Tuesday, in an unprecedented act during peacetime, and said it was ready to nationalise big companies suffering financial turmoil.

Belgium has imposed a lockdown from 11am on Wednesday until April 5th to restrict the movement of people.

Spain announced a massive €200 billion package to help companies and protect workers and other vulnerable groups. It has also ordered all hotels to close from March 24th.

German chancellor Angela Merkel used a rare television address to urge Germans to abide by restrictions bringing social life to a standstill, calling the coronavirus pandemic the country’s greatest challenge since the second World War. “This is serious – and you need to take it seriously,” Dr Merkel said during a speech delivered to the nation on Wednesday evening.

Russia will close all schools for three weeks in what officials are calling an extended spring break. The country has so far reported 114 confirmed cases and the government there has closed the borders to foreigners from today.

Iran has been the hardest-hit country in the Middle East in the pandemic. Another 147 have died in the country from the virus, pushing its death toll to 1,135 in the biggest 24-hour rise yet. Its leadership announced on Tuesday that “millions” could die if people keep travelling and ignored health guidance.

Israel has ordered tens of thousands into home quarantine, turned hotels into hospitals and is setting up drive-through testing centres. The government has instructed the Shin Bet internal security service to start deploying phone surveillance technology to track the moves of the infected.

Saudi Arabia said its mosques would no longer receive worshippers for daily prayers or Friday congregations.

On Wednesday, Burkina Faso announced its first death from the virus, which is also the first known fatality in sub-Saharan Africa. The country has confirmed 27 cases and it is suspected that at least 200 more people have the disease.

Nigeria will from Saturday ban entry to arrivals from 13 of the countries worst affected by the coronavirus pandemic, its minister of interior said on Wednesday. All the countries on the list, which includes the US, Britain, Germany, China, Italy, Iran, South Korea and Japan, have reported more than 1,000 coronavirus cases.

South Africa has 116 confirmed coronavirus cases, nearly double the number announced two days ago. Fourteen of the new cases are from local transmission, a worrying development in the country, which has the most cases in sub-Saharan Africa.

US president Donald Trump said on Wednesday his country would close its border with Canada to “non-essential traffic”, as the US struggled to slow the spread of the coronavirus.

“We will be, by mutual consent, temporarily closing our Northern Border with Canada to non-essential traffic. Trade will not be affected. Details to follow!” Mr Trump wrote on Twitter.

All 50 states in the United States have reported cases, with the total number exceeding 6,400. Kentucky and Illinois have recorded their first coronavirus deaths, driving the nationwide death toll to at least 108.

The US Senate on Wednesday passed legislation providing more than $100 billion to confront the coronavirus outbreak by financing free testing for the virus, expanded paid sick leave, additional food aid and other urgently needed steps.

However, US treasury secretary Steven Mnuchin fanned fears of economic collapse on Wednesday by telling politicians on Capitol Hill that 20 per cent unemployment was an extreme possibility should the virus have devastating effects on American businesses, many of which are already under duress.

Canada said it would provide financial support to people affected by the coronavirus outbreak.

Brazil has reported its first three coronavirus deaths and said tests were under way on four other possible Covid-19 fatalities.

Tango classes, shows and milongas have been suspended in Argentina’s capital Buenos Aires for at least 15 days.

Chile may postpone a referendum on a new constitution scheduled for April 26th.

Australia has banned the public from the national sports institute in Canberra to reduce the risk of athletes contracting the coronavirus in the run-up to the Tokyo Olympics.