Panic-buying of gold as Germany goes into coronavirus lockdown

Berlin Letter: ‘At times like this you need to diversify ... gold is always a safe investment’ 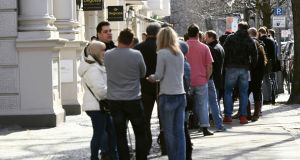 On a leafy side-street in western Berlin, the 26th person joins a queue outside the shop. It’s not a supermarket, nor is it a chemist. It’s a gold shop.

With the number of confirmed cases nearing 10,000, Germany is entering the second phase of a new coronavirus reality.

After a staggered start, Germany joined its mainland European neighbours in lockdown on Wednesday. The last 10 days have seen scenes here similar to elsewhere in Europe: cafes as empty as food shops are full; sold-out pasta, fights for toilet paper. But the sight of gold panic-buying in Berlin’s Fasanenstrasse is a new one.

“At times like this you need to diversify,” says a 30-something young man in designer sportswear, checking his smartphone nervously. Does he fear the euro is in danger of Corona? “I’m not sure. Gold is always a safe investment.”

The run on gold is not just a Berlin phenomenon. Ignoring social distancing health warnings, tightly-packed queues could be seen this week outside branches of gold trader Degussa, from Hanover to Frankfurt to Munich.

There are two types of gold customers waiting in the spring sunshine. The first have up to €10,000 they want to exchange anonymously for gold, fearing cash machines will soon stop working. They are in for a moderate bargain thanks to the second type of customer here: selling gold to cover dramatic falls in stock prices.

The gold sell-off on markets is reflected in trading prices: despite the growing pandemic panic, gold prices are down nearly 5 per cent in the last 30 days.

Looking ahead to the next 30 days, daily life in Germany is now closely regulated: minimum social contact, schools are shut and some state exams postponed. Only stores selling essential food and supplies are open, though Germany’s federal structure means all 16 state deviate slightly: playgrounds in Berlin and the western state of North Rhine-Westphalia are open but closed elsewhere.

Restaurants in Schleswig-Holstein, on the Danish border, have closed entirely while restaurants in other states have limited opening hours.

In Hamburg the legendary all-night Elbschlosskeller pub has closed for the first time since it opened its doors in 1950. As the original key was missing due to seven decades of neglect, the owner had to get a new lock fitted.

Down south, a dream came true for some Munich residents: treated to free beer from a local bar owner who sells non-pasteurised beer that keeps a maximum of two weeks.

“We’re closing and thought, ‘why not give it away instead?’, all 2,000 litres,” said Florian Schonhöffer. “Of course it’s a catastrophe but this affects all of us.”

With retail in suspended animation, Germany’s car industry is to follow this week with VW, BMW and Daimler all shuttering their production plants. New border checks in Poland have lead to lorry tailbacks of up to 60km in Saxony.

“We are also thinking of how, in addition, we can stimulate firms directly,” he told Die Zeit weekly, suggesting non-trading companies could apply for rent relief.

Chancellor Angela Merkel, facing criticism for her restrained response to the pandemic, will use a broadcast to the nation on Wednesday evening to urge citizens follow emergency measures.

Infection specialists at Germany’s Robert Koch Institute (RKI) have warned of “exponential growth” of the virus in the coming days.

“We are at the start of an epidemic,” said Lothar Wieler, RKI president. “If we don’t manage to implement the measures it’s possible that in Germany, in two to three months, we’ll have up to 10 million infection people.”