Ryanair to fly Shannon-Ibiza this summer 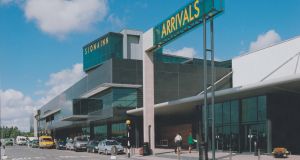 Ryanair will fly twice a week from Shannon to the Spanish holiday island of Ibiza and East Midlands Airport in Britain between now and October.

The airline will begin services to both destinations from the mid western airport this week, adding a potential 43,000 extra passengers to traffic through there this year.

Ryanair will fly to Ibiza, the best-known of the Balearic Islands in the Mediterranean, on Wednesday and Sunday from now until the end of October.

The airline will serve East Midlands Airport, close to Leceistershire, Nottingham and Donnington motor racing track, in England, on Mondays and Fridays.

Mr Murphy described East Midlands Airport as the “gateway to a really interesting part of the UK”.

1 Over 400 complaints from migrant workers at meat plants lodged with WRC
2 Avoca warns of redundancies due to coronavirus
3 Coronavirus spreads to sandwich king
4 Companies without tax clearance shut out of Covid wage subsidy
5 The Irish Times Deal of the Year: The three finalists
6 Staff at Dublin and Cork airports to vote on work practice changes
7 Coronavirus: We must save lives but we also need to live
8 The Irish Times Company of the Year: the three finalists
9 McGann stepping down at troubled Aryzta
10 Brown Thomas job cuts; sandwiches and Covid; and Ulster Bank’s blues
Real news has value SUBSCRIBE