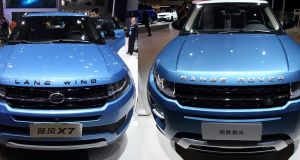 Jiangling’s Landwind X7 SUV (left) is displayed at the 2015 Shanghai motor show; on the right is the Range Rover Evoque

On Friday the Beijing Chaoyang District Court ruled that five major features of the car were copied, and ordered Jiangling to cease production, sales and marketing of the vehicle.

Jiangling has 15 days to appeal against the decision. The company was not immediately available for comment.

Several international carmakers have complained about local brands copying their designs, but the case is the first time that a Chinese court has ruled in favour of an overseas manufacturer over a Chinese carmaker.

In 2008, Fiat sued Great Wall Motors for copying the design of the Panda car, in a case that was successful in Italy – banning the sale of the Chinese car in Europe – but that had no bearing on sales in China.

In 2016, a Chinese clothing company lost a court battle with BMW for using a logo that was similar to the German car brand’s emblem.

Other cases around copycat designs have been highlighted across the industry, though have never been subject to legal action, such as the Zotye SR9, a vehicle that closely resembles the Porsche Macan.

International carmakers are often reluctant to sue, partly because it may damage their own brands in the minds of Chinese buyers.

“This ruling is a clear sign of the law being implemented appropriately to protect consumers and uphold their rights so that they are not confused or misled, whilst protecting business investment in design and innovation,” said Keith Benjamin, Jaguar Land Rover global head of legal.

“We welcome this decision of the Beijing court, which further strengthens our confidence in investing in China and in the fairness of intellectual property adjudication in the Chinese courts.”

Carmakers have long operated in China with the knowledge of potential copycat operators in the market, partly in order to gain access to the world’s largest car market, and a key source of profits for many of the major operators.

Sales in the country fell last year for the first time in two decades, and many of the largest international operators have suffered a decline in sales and profits in the country.

Sales in Jaguar Land Rover, one of the worst hit, halved in the most recent quarter. – Copyright The Financial Times Limited 2019