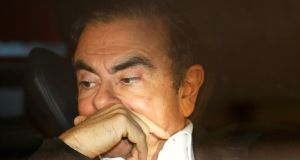 Former Nissan Motor chairman Carlos Ghosn has been charged with two counts of misconduct, one for misreporting his pay at Nissan, and another of using his position for personal benefit. Photograph: Reuters/Issei Kato/File Photo

The holding company at the heart of the Renault-Nissan alliance owned four private jets, rather than the one previously assumed, a joint investigation by the two carmakers has found.

The three extra jets not previously known about were discovered as part of an internal investigation by Renault into the company following the arrest of Carlos Ghosn last November in Japan.

Two of the aircraft were long range jets, while two were used for shorter journeys, investigators found.

One of the planes, bearing the tail number NI55AN, was the one in which Mr Ghosn arrived in Tokyo last November immediately before his arrest.

Questions about the use of company jets have focused on the blurred lines between Mr Ghosn’s globe-spanning business remit and his personal life, with children and personal properties on several continents.

The jets were owned by RNBV, the Netherland-registered joint venture that housed some of the alliance-level functions of the two carmakers.

Renault has separately alerted French prosecutors to millions in suspicious payments made to an alliance business partner in Oman for marketing purposes. The news of the payments was first reported by Reuters and confirmed by people familiar with the matter.

Alliance partner Nissan has previously suggested it was also looking into $30 million in questionable payments to a subsidiary in Oman.

The investigation in February also found that a Renault sponsorship of the Palace of Versailles allowed Mr Ghosn’s use of the venue for a wedding party, at an estimated cost of €50,000. He has since offered to pay back the money.

Mr Ghosn has been charged with two counts of misconduct, one for misreporting his pay at Nissan, and another of using his position for personal benefit after passing trading losses on to Nissan’s books.

Mr Ghosn continues to protest his innocence over the charges, saying that his arrest is a result of “plot and treason” at Nissan in order to prevent his attempts to merge the company with Renault.

Renault is expected to report on both investigations during a board meeting scheduled for Wednesday. Renault declined to comment.