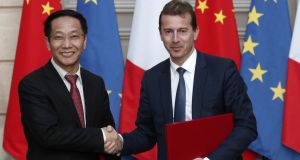 Airbus has agreed a multibillion-dollar deal with China to sell a package of 300 aircraft to the country, strengthening the European aerospace group’s foothold in the world’s second-largest aviation market.

The mammoth order, which is worth an estimated €30 billion, was one of 15 commercial agreements and a further 13 cultural and other deals signed by the two sides during a visit to France this week by Chinese president, Xi Jinping.

The deal is a blow to its arch rival Boeing, which is battling to restore trust in its own best-selling 737 Max aircraft after two crashes of the model in just five months.

Chinese airlines operate 96 of the Max 8 planes. The country’s safety regulator was the first to ground the Max following the crash of an Ethiopian Airlines flight on March 10th which killed all 157 people on board.

French president Emmanuel Macron has pushed for the EU to be more robust in its trade negotiations with China, particularly in his demand for reciprocity in terms of public procurement in areas such as railways and other transport infrastructure.

“We need more access for our companies to China,” Mr Macron told Mr Xi after their meeting at the Elysée palace in Paris. “The conclusion of a big contract for Airbus is a significant move forward and an excellent signal.”

The aviation agreement with China’s Aviation Supplies Holding Company covers 290 of Airbus’ best-selling A320 planes and 10 A350 XWB jets.

“We are honoured to support the growth of China’s civil aviation with our leading aircraft families – single-aisle and wide-bodies,” said Guillaume Faury, president of Airbus’s commercial aircraft division who takes over as chief executive in April.

“Our expanding footprint in China demonstrates our lasting confidence in the Chinese market and our long-term commitment to China and our partners,” he added.

China has become a key battleground for Airbus and Boeing, with analysts predicting the Asian country will become the world’s biggest aviation market by early next decade.

Airbus on Monday said its latest market forecast to 2037 predicted that China would need some 7,400 new passenger and freight aircraft in the next 20 years – representing more than 19 per cent of the world total demand for over 37,400 new aircraft.

By the end of January 2019, Chinese airlines had some 1,730 Airbus aircraft in operation, according to the company.

The news also comes at a sensitive time in trade talks between the US and China. Robert Lighthizer, the US trade representative, and Steven Mnuchin, the treasury secretary, are due to travel to Beijing on March 28th for meetings with Liu He, China’s vice premier and leading economic official.

Boeing had been trying to benefit from a US-China trade deal. Just days before the Ethiopian crash, Dennis Muilenburg, chief executive of Boeing said: “I think there’s an economic opportunity here for aeroplanes to be part of the ultimate deal and help further close the trade deficit gap.”

Also on Monday, the chief executive of Ethiopian Airlines stood by Boeing despite the crash earlier this month and insisted its pilots had been “fully trained” to deal with the plane’s automated software system which has become a focus for investigators. – Copyright The Financial Times Limited 2019