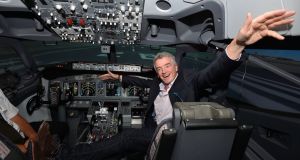 Ryanair has reportedly written to all Dublin-based pilots giving them until January 17th to accept a 20 per cent pay increase, which was previously rejected prior to Ryanair’s recent decision to recognise unions.

The same offer was made last year to pilots on condition they were not represented by trade unions, but the offer has been reissued by Ryanair on the basis that its union recognition policy has changed, according to a report by RTÉ.

The offer to Dublin pilots was reportedly made in a letter dated on Monday by Peter Bellew, Ryanair’s chief commercial officer, who is overseeing much of the airline’s contacts with the unions.

He told the Dublin pilots the increase was being paid to new recruits since November and contractor pilots since January. Ryanair pilots in Cork and Shannon have also been receiving increased pay since November.

Dublin pilots, Mr Bellew reportedly informed them, will receive the pay rise in time for January’s payroll if accepted by the 17th. He said it had been agreed between the airline and worker representatives, including Fórsa (formerly Impact) trade union, that ongoing talks on a union-recognition agreement should not delay payment of the higher rate for Dublin pilots.

A spokesman for Fórsa said: “Fórsa will be writing to company management to say we’ll ballot members on the pay package, which we see as an interim measure pending engagement on pay following completion of a recognition agreement between Ryanair management and Fórsa.

“The union is going to hold a number of meetings with members on these matters over next couple of days. We dont see [January] 17th as a ‘cinderella moment’ as there’s no objective reason why any pay package can’t be backdated, if accepted.

“The underlying point remains that, if Fórsa is recognised by the company for collective bargaining, which it now is, pay must be negotiated with the union and it’s our responsibility to ballot members on any outcome.”

Ryanair said it doesn’t comment on “communications with our people”.