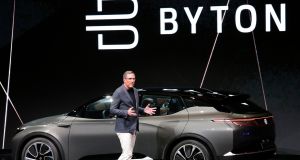 A China-based startup established by former BMW executives is among the latest to take a swing at the growing market for electric and autonomous vehicles, competing against giants such as Nissan and General Motors.

Byton, formerly known as Future Mobility, unveiled a concept SUV at CES in Las Vegas on Sunday, and said its first mass production model will be available for sale next year starting at $45,000. The company will complete its Nanjing factory in late 2018 and start production a year later, chief operating officer and co-founder Daniel Kirchert told reporters at the event.

Promising internet connectivity and digital services in its Smart Intuitive Vehicles, or SIVs, Byton is among a crop of companies aiming to upend traditional carmakers as power trains move away from polluting fuels. They are also seeking to take on leaders such as Tesla by offering newer technologies as the race heats up for batteries with longer driving ranges and as leading markets, including China, consider phasing out automobiles powered by gasoline and diesel.

“China is the world’s fastest-growing and biggest EV market, but at the same time, it is short of global players and companies producing products that can compete with the best premium players in the world,” Mr Kirchert said.

Some of the features of the Byton vehicle include face recognition cameras to unlock the doors and voice recognition using Amazon.com’s Alexa.

Another Chinese EV startup, NIO, set up in 2014 by founder William Li and a group of internet entrepreneurs, started selling its first model last month at about $69,000. Tesla’s Model 3 starts at $35,000. NIO has raised more than $1 billion from investors including Tencent Holdings, according to people familiar with the matter. XPeng Motors, backed by funding from Alibaba Group, is set to unveil its production model at CES on Tuesday.

Byton is partnering with Robert Bosch GmbH and France’s Faurecia, and will announce a strategic tie-up in Silicon Valley for autonomous vehicle development this month, chief executive Carsten Breitfeld said.

Mr Breitfeld was a leading engineer for BMW’s i8 electric car and worked at the German maker for about 20 years, while Mr Kirchert was in charge of marketing at BMW’s local venture in China, with stints at Nissan’s Infiniti as well.

Some of the features Byton offers include a driving range of 400km for the base model and 520km for the higher, four-wheel drive variant; the ability to recharge 80 per cent of the battery in 30 minutes; and human-vehicle interaction that incorporates voice recognition, touch control, biometric identification and hand gestures.- Bloomberg

1 Will your boss let you work long-term from home – or from abroad?
2 Plans for €2bn Dart expansion lure Bombardier to Dublin
3 Virgin Media unveils new entertainment platform
4 Revolut shifts regulation of Irish customers to Lithuania
5 Only half the homes needed this year will be built, construction event told
6 McGuinness faces Brexit and Covid grilling at parliamentary hearing
7 Subway bread too sweet for the Irish tax authorities
8 Not just another brick in the wall
9 AA Ireland bought by Olivier Sarkozy-led fund for more than €240m
10 Google tells workers to return to country where they are employed
Real news has value SUBSCRIBE