Pretax profits down at group behind Talbot hotels and Pettitt supermarkets 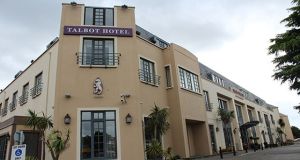 The Talbot Hotel in Stillorgan: Figures filed by Torski Ltd show that the group’s revenues fell fractionally to €129.97 million from €130 million.

Figures filed by Torski Ltd show that the group’s revenues fell fractionally to €129.97 million from €130 million. The Wexford-based group operates under the Talbot Collection and Pettitt’s Supervalu brands across 16 properties. The group also operates the Stillorgan Park Hotel in Dublin.

During 2018 the group bought and renovated Newbay House in Wexford as a private wedding and events venue, upgraded a supermarket in Gorey and refurbished 70 hotel rooms across the chain. The group spent €7.64 million on purchasing assets last year and this followed a spend of €5.5 million under that heading in 2017.

The figures show that the largest proportion of the group’s revenues, almost 75 per cent, come from the retail trade. The directors said the supermarket division has traded well in a very competitive environment.

“However going into 2019, the hotel division faces big challenges in the form of high insurance costs, a VAT increase and Brexit, ” the directors said.

Staff costs at the group increased from €25.7 million to €27.2 million as the group added more than 30 jobs last year, bringing staff numbers up to 1,058.

Group operating profits were just over 3 per cent lower at €6.9 million. However interest payments of €691,684 took pretax profits back to €6.24 million.

After tax, the group recorded profits of €5.3 million. This takes account of combined non-cash depreciation and amortisation costs of €3.69 million.