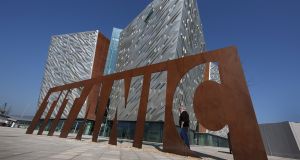 Northern Ireland’s biggest tourist attractions from Titanic Belfast to the Seamus Heaney HomePlace are set to play a leading role in a new campaign that aims to woo greater numbers of visitors to the North and help grow tourism revenue to £2 billion over the next 10 years.

John McGrillen, chief executive of Tourism NI, the government body which markets Northern Ireland on the island of Ireland, said it is adopting a “new approach” to promoting Northern Ireland tourism because the body wants to “transform how prospective visitors perceive our destination”.

Launching details of the campaign at the annual World Travel Market event in London on Monday, Mr McGrillen said Tourism NI has a “new destination brand” - Northern Ireland Embrace A Giant Spirit - that encapsulates everything the North has to offer visitors.

“Tourism is a fiercely competitive, global industry and it is crucial that Northern Ireland has prominence both on the island of Ireland, and internationally,” Mr McGrillen said.

“It will build on the strengths and successes of the last decade to give authentic experiences provided by businesses large and small that will leave our visitors with unforgettable memories.”

Tourism NI drew on the talent of some of Northern Ireland’s best known artists and poets to help develop the destination brand including the critically acclaimed Colin Davidson, the Pulitzer prize-winning poet Paul Muldoon and Oscar-nominated cinematographer Seamus McGarvey.

According to the agency, tourism in the North has blossomed into a £1 billion industry in the past 10 years while overseas tourism alone has contributed around £560 million to the Northern Ireland economy.

1 Will your boss let you work long-term from home – or from abroad?
2 House asking prices rebound but will likely fall again - MyHome
3 Revolut shifts regulation of Irish customers to Lithuania
4 Plans for €2bn Dart expansion lure Bombardier to Dublin
5 Google tells workers to return to country where they are employed
6 AA Ireland bought by Olivier Sarkozy-led fund
7 Subway bread too sweet for the Irish tax authorities
8 Construction sector 'unlikely to recover' before 2023
9 City firms move £1.2tn and 7,500 jobs out of London - EY
10 Let’sGetChecked chosen by American Airlines for pre-flight Covid testing
Real news has value SUBSCRIBE