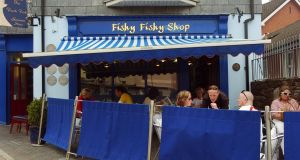 Fishy Fishy in Kinsale, Co Cork. In 2015, chef Martin Shanahan added an extension to his restaurant and the investment continued to pay dividends last year

In 2015, Mr Shanahan added an extension to his renowned restaurant in the Cork coastal town and the investment continued to pay dividends last year.

Mr Shanahan established Fishy Fishy in 2006 and it has a capacity for 160 customers, with seating for 90 patrons downstairs, 40 upstairs and 30 outside.

The pair opened their original Kinsale Gourmet Store in 1990. The success of the fish shop and deli led them to expand the business and culminated in the opening of Fishy Fishy.

In 2009 Martin embarked on his first venture into television, filming the first of a successful series of television programmes, Martin’s Mad About Fish.