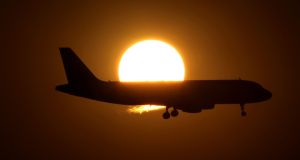 European pilots have vowed to continue to challenge a US decision to grant an Irish-based airline a licence to fly there on the grounds that it will undermine aviation industry pay and conditions.

Washington’s department of transportation has decided to “tentatively” approve Irish-registered Norwegian Air International’s application for a foreign carrier’s permit, paving the way for it to offer low-cost flights between the EU and US, including a proposed Cork-Boston service.

The move angered the European Cockpit Association (ECA), which represents pilots across the EU. Its president, Dirk Polloczek, said the organisation would work with European and US colleagues to prevent the approval being made permanent.

Pilots’ unions on both sides of the Atlantic accuse the airline of using the Republic as a flag of convenience to hire cheap labour. The ECA said yesterday that the airline engages crew nominally based in Bangkok through a company in Singapore. However, the staff work on flights to and from Europe. This allows it to avoid EU employee protection legislation.

The airline recently told the US department of transportation and the Irish Aviation Authority that only EU and US citizens would crew its transatlantic flights.

The Scandinavian group registered its subsidiary in the Republic in order to get the benefit of agreements that allow airlines licensed in one EU country to fly from any member state to the US.

Mr Kjos said it chose the Republic because it has a high standard of safety regulation and it is a centre for aircraft finance.

1 The wealth of the Irish – how do your assets match up?
2 Irish company to test vaccines on volunteers deliberately infected with Covid-19
3 Dunnes Stores set to enter grocery delivery market
4 KBC Ireland fined €18.3m for ‘unconscionable’ tracker scandal role
5 Eir takes on extra staff as ComReg chases it on complaints
6 Willie Walsh joins CarTrawler as deputy chairman
7 Should I switch bank now with Ulster Bank at risk of closing?
8 Irish Fairy Door Company moves to licensing model
9 Air travel never going ‘back to way it was’
10 Will Facebook walk away from European market after data protection 'hissy fit'?
Real news has value SUBSCRIBE