The carrier, struggling with rising costs and intense competition, is seeking savings of €205m across the company this year 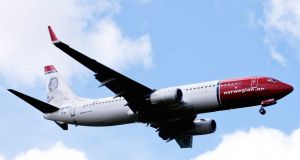 Norwegian hired 50 pilots and 200 crew for its Dublin base, which it opened in late 2017. The airline flies to several US destinations from the capital

Norwegian Air plans to cut an estimated 150 jobs, slash pay and reduce craft at its Irish base as it bids to save €200 million.

The carrier, struggling with rising costs and intense competition, is seeking savings of 2 billion Norwegian crowns (€205m) across the company this year.

An internal communication shows that Norwegian told unions at a meeting that it will cut the number of craft it has at Dublin airport to one or two next September from the six that will serve the Irish base over the summer.

Around 150 jobs could be hit in Dublin, according to some estimates. The company did not give any details of the impact on employment or on its services between the Republic and and the US.

Norwegian hired 50 pilots and 200 crew for the Dublin base, which it opened in late 2017. The airline flies to several US destinations from the capital.

The company also wants to slash pilots’ pay by 7 per cent and that of cabin crews by 4 per cent, or alternatively will reduce both groups’ salaries by 5.8 per cent.

Norwegian will offer Dublin workers the chance to bid for alternative posts with the airline from June in a bid to avert layoffs if there are vacancies.

The same meeting, in Norway’s capital Oslo, heard the carrier could reduce the number of air operator certificates (AOCs) – airline licences – it holds. If Norwegian were to drop its Irish AOC this could hit a further 70 jobs in Dublin in areas such as finance and marketing.

Bases in Spain, Italy and the US face the axe or severe reductions under the airline’s cost-cutting plan.

Norwegian has pledged to redeploy workers wherever possible. The airline said that it was in constant dialogue with unions as it sought to return to profitability.

The Irish Airline Pilots’ Association – which was represented at the Oslo meeting – is due to discuss the proposals this weekend.

In December, Norwegian said it was struggling to fill its aircraft as expansion of its capacity outpaced demand. It was also labouring under a loss on fuel hedge contracts.

Earlier this week the airline flagged the cessation of several routes and the shutting of a number of bases as part of its overall plan to cut costs.

The airline has already said it will close bases in three Spanish destinations as well as in Stewart and Providence in the US.

Norwegian has in the past been courted by IAG, which also owns Aer Lingus.